T
tnffishman
Anyone ever fish Clear Lake on Mt. Hood? My dad caught a 27 inch rainbow on flies and every year my cousin pulls at least one over 20 inches out of there, but I can never catch any over 17 inches. 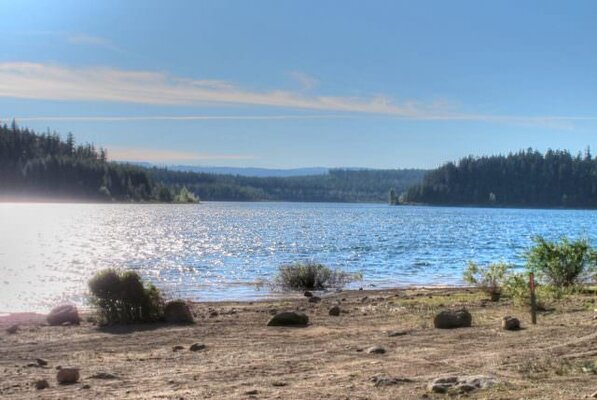 Clear Lake is a reservoir built for irrigation. It actually drains into the Deschutes river unlike nearby Timothy Lake which drains into the Clackamas River. Clear Lake and nearby Frog Lake(both close to Hwy. 26) are planted with rainbows from the Oaksprings Hatchery on the lower Deschutes near Maupin. Olallie Lake and Rocksprings Reservoir, not too distant, also get planted by Oaksprings.

Interestingly, due to large quanities of snow this year, Olallie and Frog Lakes won't be stocked this year, according to the ODFW. HOWEVER, all the trout destined for Olallie and Frog Lakes have been planted in another lake. Clear Lake. That's right. Clear Lake has had it's normal share of trout put in plus all the fish that were slated for Frog and Olallie. Three lake's worth of fish in one Lake!

The biggest Rainbow trout grown in Oregon by the ODFW are from the Oakspring's Hatchery. The BROODER trout from Oaksprings are incredible. They average perhaps 7 to 8 pounds each. Also, numerous brooder Rainbows up to 20 pounds(that's right, TWENTY POUNDS!!!) are not uncommon. So Rainbow Trout up to 20 pounds are in Clear Lake now, and have been since May. One of the ODFW people at Oaksprings told me this a few weeks ago. I have know about the huge trout in Clear, Frog, Olallie and RockSpring's for years. Hope this info is helpful.
B
bachman64
Thanks for the insite bff!! I think I will be heading up there this week to see how I do. Ive heard rooster tails work well there...any other suggetions??
B
bigfootfish
Well, if you have lots of patience, try rainbow powerbait, glitter or not, on the bottom with a sliding sinker. Also, #3 Blue Fox spinners with an gold blade(sunny days) or a silver blade(cloudy days). A gold, pink or orange body might work. Of course, if you have a floating device, drag a wet fly behind you.
Good luck!

Raincatcher
First of all, I would like to make sure both of you feel welcome here on OFF. Welcome aboard! Great job bigfootfish of supplying all kinds of information and then some! Glad to have both of you join us.
C
chris61182
I'll second that welcome, and also a big hearty thank you!
B
bigfootfish
I'm glad to have discovered the Forum, as an angler can never have too much information, or resources. I've got a week of vacation coming in mid-August and I'm still not sure where to spend it fishin'. I think Clear Lake near Mt. Hood might be a target.

I'd like to see a section of the Forum dedicated to telling fishing tales. I have a true story that is flat-out unbelievable. I would hardly believe it myself if I did not have witnesses.
T
Theo
the fishing there sounds great. this is the clear lake near santiam junction and not the one out of Keizer right? I hope so cause I'm going fishing there tomorrow! ! ! So bff maybe I should pick up some sliding sinkers and a wet fly. . . Whats a wet fly? (I don't fly fish if that's what that is.)

Oh yeah. If anyone has any tips on where to fish Clear Lake (if there's preferred spots) that would be helpful.
B
bigfootfish
No problem. Clear Lake near Mount Hood, 1/2 mile off of Highway 26, NOT the one near Santiam Jct which is the headwaters off the McKensie river.
T
Theo
huh. well I checked the maps and Mt hood looks like it's actually kind of near the Santiam junction off of 126. The other clear lake that I found looks like it's in Keizer, which to me, didn't seem like it was near Mt. Hood. Now apparently I've found that there are 3 clear lakes in Oregon. I just hope that the fishing is good at the one off of 126.
C
chris61182
Mt. Hood is actually near-ish the gorge, you're probably thinking of Mt. Jefferson or perhaps Mt. Washington.

And as for the confusion about clear lake, I imagine every county in Oregon has at least one. Kind of like Elk Creek, Salmon River, or Lost Lake.
B
bigfootfish

Clear Lakes: How many?​

Actually there are four Clear lakes in Oregon. Might be more. The headwaters of the McKensie river Clear lake is one, the one by Mt. Hood/Timothy lake is two, the one by Keizer is three and the one down by Reedsport is four.
T
tnffishman
i originally made this thread about the clear lake near timothy/trillium past govt. camp. i spent all last week up there and fishing was suprisingly slow. i usually troll ford fenders with wedding rings and nail em, but found myself catching only two or three keepers in a three hour trolling session. in the beginning of the week, the fish were really bitin off the bank with any powerbait u threw out. but the bite died down after a few days. i usually fish deep in the coves with powerbait, and flies. no bites on flies this time though. and no big ones this trip either. if u want to go to clear lake, i would all but guarantee catchin a lot of fish, but u will hav to fish hard. u can catch em off hte bank, but a boat, raft, or floattube would improve ur chances.
C
chris61182
I'm tempted to take out my rubber raft but I'm really wary of taking it out anywhere with a lot of wind, how bad was Clear Lake?

Oh and anyone know if there are crayfish in there?
T
tnffishman
the wind can get pretty rough there, but i was out in my float tube and was handling the wind well. my friend was out in a inflatable raft with paddles and was doin fine also. we put three crawdad traps in for the week and only got eight, but i think with more traps and better placement(closer to shore) u would hav a better chance.... Good Luck
You must log in or register to reply here.