T
The Nothing
I really wanted to build a fiberglass rod. 8' 4 or 5wt. Building on a budget, though, I was unsure if I'd be able to build it on glass. I barely even flyfish, so if the wife knew I threw down over a bill on a blank, she'd probably not be too happy. I shopped around on the Anglers Workshop website a bit, and made a few mental selections. One day I made the drive up to Anglers Workshop, but since they're next door, I went into Lamiglas first.

I made the walk across the parking lot to Anglers Workshop, picked up an appropriate sized tiptop (i knew the kit one was too small) and a reamer for the handle.

What I didn't realize, was that, clearly, the parts from a rod building kit i happened to have was made to go with a graphite rod, and probably a light 3wt. The guides are probably OK, but the winding checks included were tiny. The handle is smaller than I thought. And the reel seat was almost the same diameter as the .490" butt of the Lamiglas 5wt. Fortunately I made a good pick on the reamer, and while the wood is now pretty thin, the reel seat does fit. I went heavy on the epoxy, mostly to reduce the chance of the wood splitting - its only a couple millimeters thick. I was also able to get the largest of the winding checks heated up a bit and got it to slide down into place as well.

That's where I'm started. I spined it fine, and working out the guide spacing. I fish 95% of the time from my kayak, and went with the oversized striping guide because of that. I almost went with an oversized tip too... Just think of throwing flies while you're sitting on the ground, and that's what kayak fishing is like.


Anyways... here are a few pics of how things were looking after the first night..

top and bottom all glued up and dried after an overnight 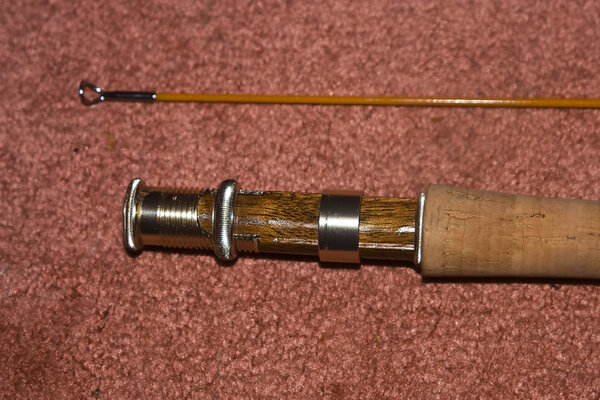 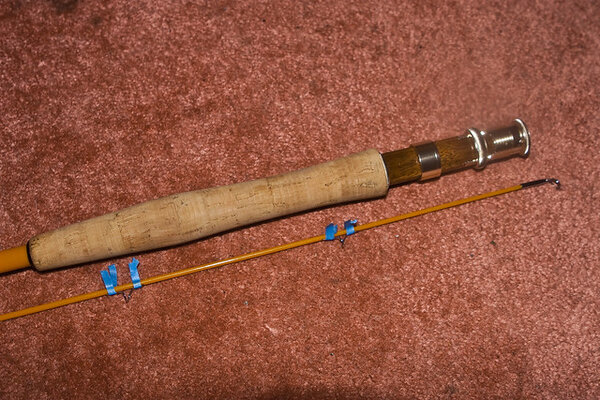 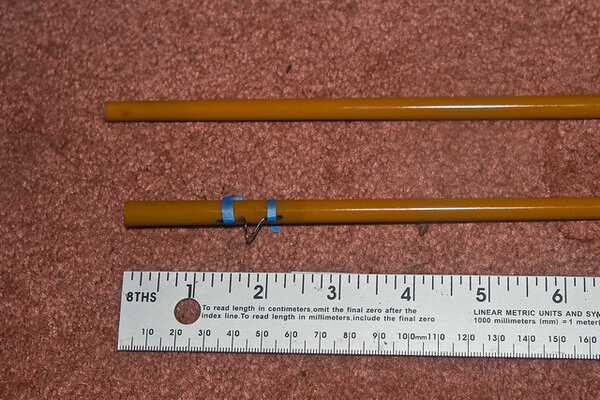 This spacing was a bit of a concern. I didn't want to stress the ferrule unnecessarily and cause failure Since it's a tip-over, I thought I'd start the wrap in the section a bit further ahead than normal (where the dark reinforcement can be seen) and then continue it all the way past the guide to the end. I'm also thinking I could lay some wraps between the feet as well. I've seen plenty of commercially built rods that have placed guides even closer to the ferrule, so I guess i should be fine

Lamiglass doesn't publish "suggested" guide spacing for their blanks. They only publish the spacing for the rods they build. Since they only sell blanks of the fiberglass fly rods, they don't have anything to suggest for spacing

I had thought about spreading things out a bit more, and reducing the guide count by 1, but after swinging it a bit, I feel pretty happy with things like this. I'll be wrapping in red. 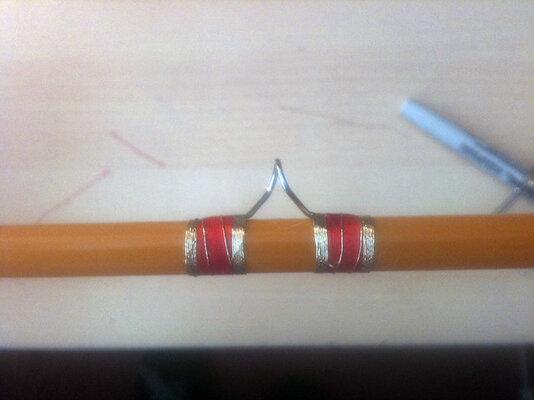 Finally got around to putting some wraps on the rod. This was the first guide I put together, followed by the stripping guide making the butt half complete. I've finished wrapping the top with the red, and its time to move on to the gold. So far things are halfway decent. 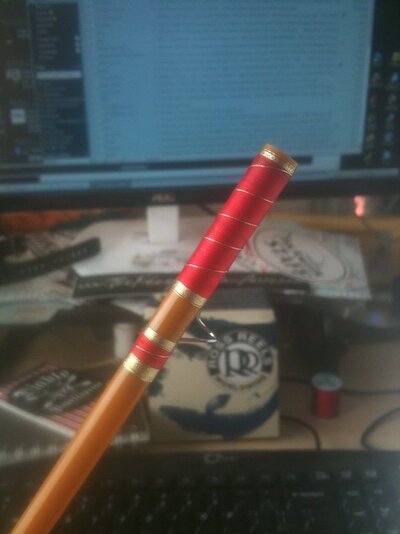 The Ferrule was some work. that's a lot of thread for someone hand turning the rod. I kept things nice and tight but needed to do quite a bit of burnishing to get things lined up - that was actually the story of the build... 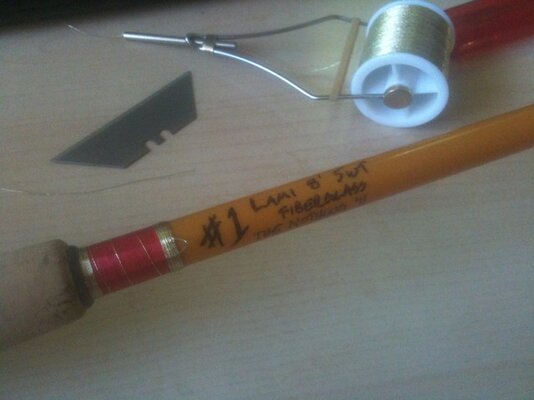 I ended up erasing all of this, but went with the same look. I hit it with a bit of 220grit and wrote things out with a super-fine hawks quill pen and archival acrylic ink. It looks great under the gloss too... 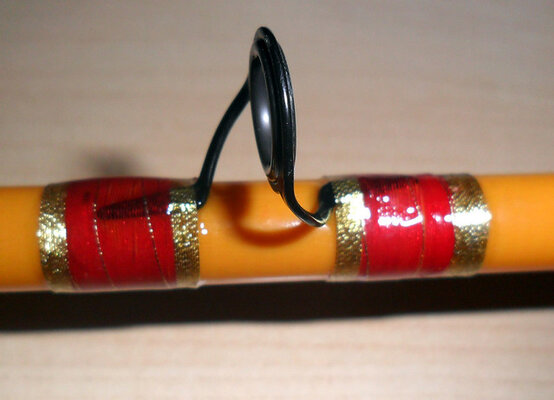 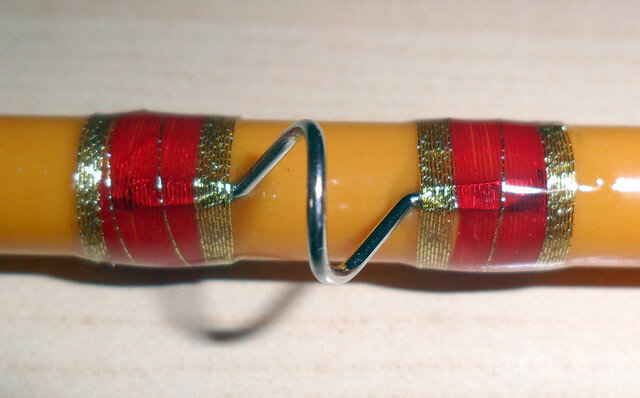 In the end, it's a great rod, and I have a lot of fun with it. The guide spacing, however, is off - mostly in regards to the stripping guide. If I were to do it all over again, I'd move it up another 4 inches.
T
the_intimidator03
that looks purty good to me. btw nice to see ya on the forum again it sure has been a while :-D
S
Sinkline
That is certainly unique. No one will mistake it for anything but a custom built rod! Hope it is as much fun to fish as I am sure it was for you to build.


Randy
H
halibuthitman
Very cool!
F
FlyBum
Nice Stick! I need to build something over the winter so I don't' get the Shack Nasties!
G
GDBrown
I'm impressed with your work! I like the two tone wrapping quit well.

I have just finished building a wrapping jig and replaced one of the guides on my 5wt as a test. I still need to put the epoxy finish on it but it wrapped really easy.
I spent more time figuring out how I wanted the jig made than anything else. I have a bamboo rod to redo and a 4wt to build from scratch this winter. I'll post some photos of the jig if I can tonight. I enjoy the craftsmanship part of fly fishing almost as much as the tug.... No I take that back. The tug is the drug!

GD
T
The Nothing
Thanks GD! Can't wait to see what you've put together. Already sounds much more complicated than my "jig". I had done plenty of guide replacements, but never really got the satisfaction out of those like I did building my first rod. It was better feeling than the first fly I tied.
M
mrlindeman
Welcome back man!!!!! I would have to say that is looking great so far. I love the snake guide wrappings. The but section is a piece to be proud of.
G
GDBrown
Home Made Wrapping Tool

OK, so here are a couple photos of the "Wrapping Jig". At least that is what I call it, others may have a better term for it, since I'm doing this for the first time I'm not sure of the correct terminology. 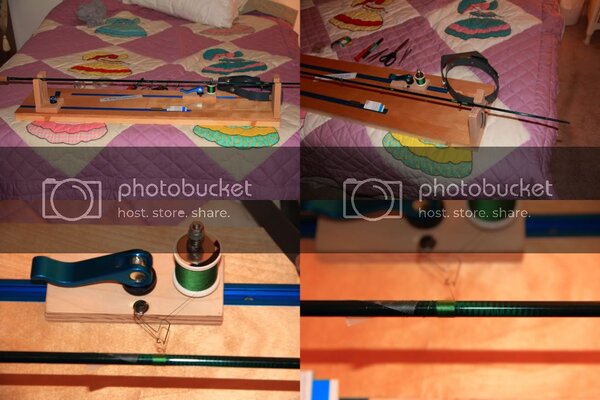 The top two photos show the overall idea and a closer look at one end. The notches in the top where the rod lies are V shaped but slanted towards the back so that the tread tensioner and end springs pull the rod into the slot and keep it from rotating when you let go. So it never looses tension on the wraps. The bottom two photos show the tread tensioner and how the wraps are nice and tight with no overlaps even when not holding the rod.:think:

The overall size is about 3ft wide and as you can see the thread block and left end rod holder are adjustable with cam lock screws so they can be moved quickly and precisely. I spent about six months researching and developing the ideas from multiple sources and everything but the cam locks and guides were made in my garage, even the springs. OK, I bought the screws too. :lol:

Hope it give some of you ideas on how to make your project easier. It took me all of 20 minutes to put on the replacement line guide even though it was my first effort with this tool. I love working with wood!

GD
T
The Nothing
Wow! that's much nicer than my setup.
O
OnTheFly
The rod seat looks very unique. Did you make it or did you buy it that way?

GungasUncle
Dig that blank. Lami's glass rod blanks are the bee's knees. You did a great job on the grip & reel seat, and the red/gold wraps are a nice touch. They look classic on that honey colored blank. The reel seat looks a bit like the ones I've seen on some wright & mcgill rods, as well as some of the higher dollar american made stuff at the fly shop. I like the slim, knurled band on it vs some of the bigger, clunkier looking stuff you see now on some other factory rods.

nice job man
T
The Nothing
Thanks thanks!

The seat is from PacBay, and I think it's the cheapest one they sell. I didn't know it at the time, but the but of the Lami was significantly thicker than the ID of the seat. It took some tough reaming to get it to fit, but the nice part about that is there is no filler material between the blank and the seat. Nice solid, custom fit.
You must log in or register to reply here.