M
Mad dog
Yea...I know...at 48 I'm old enough to know better! This story is about a fishing trip, it actually started at 3:00pm monday when I got of work. Well, it was hot and the beer was cold and going down fast! My son came home from work and we decided to take the dogs for a swim at the river while he snorkeled....TACKLE SHOPPING!!!:lol: So more beer was in order! The 1st big mistake of the day(well...the 2nd after deciding to drink) was taking our Jack Russel terror....yea, I mean TERROR!!! Everything was cool for a while, she played in the water while our lab fetched his bumper. After a bit she got wind of something in the bushes and that was it...GMF!!! Well, I was basically a drunk man stumbling around in the bushes hollering at this stupid dog that doesn't listen! Finally we found her, but by then I was thrashed, blackberry cuts from head to toe...even had them on the bottom of my right foot! Fell down a couple of times heading up the bank on the way to the truck....ya, I'm having problems! Finally made it to bed about 11:00pm feeling a little wobbly! :lol:

I had set the alarm for 3:30am but began waking up around 2:30 or so. After a bit I got up, made coffee and an egg and ham sandwich. The egg and ham sandwich was another mistake! After I ate it I though I had better lay back down. It stayed down for less than 5 minutes, I think I could have set a record for Projectile vomiting!!! :lol: Needless to say I didn't make it to the river until around 9:00am! That's how I roll....Not the 1st time I've fished hungover!

Anyway, the fishing was slow. The fish were difficult and sulking. I found a pod of 6 or so Steelhead laying in a tailout and fished over them for 3 hours without anything more than a smolt bite! I bailed on those fish and hit some other water. In one tailout I saw a bright steelhead flash but no bites, after a bit I worked my back up to the pod of steelhead. I first ran a float and fly over them with no action then switch to roe. After a few cast my bait didn't want to drift anymore so I lifted gently on the rod and felt a fish pulsing on the other end....I set quickly and FISH ON!!! The hooked fish had the other all stired up and I noticed 1 of the other steelhead following it acting excited! I tried to coax my fish downstream and out of the hole as to not disturb the other fish anymore than possible....I had a hunch I could get that other fish to eat If I didn't spook it to badly! I got the steelhead out of the hole and landed it giving the other fish plenty of time to settle down. I switched back to the float and fly and within a few casts my float danced abit then jerked underwater and shot upstream! I flipped the bail closed and the damn thing kept popping back open!!! DAMNED SHIMANO SEDONA!!! I never did get a good hookset on that fish and it came free after about 15 seconds or so! Bummer on a late summer day when the fish are being difficult! Anyway, had to work my butt off for the one I caught but one is better than none!

It was a beauty of a fish! For what ever reason, the ODFW decided to whack off both pectoral fins! I don't know about those guys sometimes! 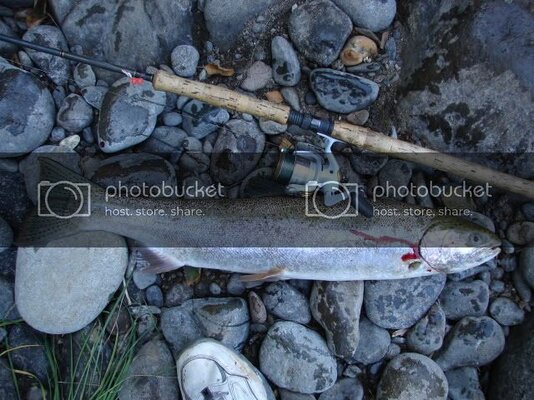 B
bigsteel
nice fish terry,sounds like you had a very slow morning,,,,,note to self dont bring terry a ham and egg sandwich for breakfast:lol::lol::lol:
M
Mad dog

bigsteel said:
nice fish terry,sounds like you had a very slow morning,,,,,note to self dont bring terry a ham and egg sandwich for breakfast:lol::lol::lol:
Click to expand...

I think I'm on the wagon for awhile!
P
plumb2fish
C'mon Mad dog don't be a quiter..lol I count on you guys to get those hang-ons for me since I had to give the cereal in a can up.
Btw, better to have hooked and lost than to not hook at all:lol:
S
skunk
Nice fish and thanks for the laugh. I needed a good story today. Haven't been to the river in a bit and I'm having withdrawls.
L
lilsalmon
nice fish....good job and great story.........green eggs and ham
T
Thuggin4Life
Classic. oh and nice fish.

Raincatcher
Geez,you just made my morning cup of coffee spray all over the carpet!! :lol: :lol: Thanks for the laugh,the carpet needed cleaning anyway. It's always good to recognize our mistakes. We even learn from some of them....At least you got a nice fish for a reward...or consolation. :clap: :lol:
You must log in or register to reply here.