Based on another true story

P
pinstriper
I woke up this morning with a few new aches and pains. Getting older is like that. "Ow. That hurts. I wonder what...oh, yeah". My face shifted from my normal vacant expression to a wide grin. A grin that, itself, was sore. I must have slept that way.

"We're probably about the sixth boat to launch today", The Man said. We call him The Man these days. He used to be The Man With The Hat. But somehow he fished all the luck out of that old hat - a vintage Captain-And-Tenile job that looked as silly as it sounds. But the thing worked. For a long time, and a lot of fish. But then the magic wore off. I TOLD HIM not to ever wash the thing. Did he listen ? No, he did not.

Anyway, The Man did whatever they do when they're launching boats. I don't know anything about launching boats. I just ride in them; I was up top, getting into my waders. When I got down to the bottom of the ramp there were two boats in the water, gently rocking in the current but at a respectful distance from each other. No paint was traded between them, no new dents or scratches - this is how you know there are some pros as the helm.

The sky is just light enough you don't need a light as we push off. "We're gonna be bouncing some bait today, boys", The Man said. I grunted to indicate I knew how to do that, even though I don't. I figured I'd let the other guy in the boat ask what bouncing was and how to do it. Confidence is everything in this game. Sure enough, The Man launches into what I'm sure was a very learned dissertation about lead being more dense than water but less dense than the dirt and rocks at the bottom of the river and how this allows you to get the bait to the bottom and how you'll feel when it's there. I think he was just killing time and keeping our minds off the 37 degree cold. The Man is a student of human psychology.

We get to some point on the river that The Man knew. He knows all the spots on all the rivers. He chose this one and set us to fishing. First drop-in, and we're fishing. About 4 minutes later BANG! Fish on, and pulling line like crazy. I'm cranking against the fish, tightening the drag, and the fish is jumping. But then it sort of gives up and swims to the boat. Coho. Wild coho, chrome bright, nice fish. But it has to go back, and at least I know we're not getting skunked today. I needn't have worried.

Fast forward 30 minutes, and we've had 4 more bites: one lost when my boat partner tried to set the hook like he was bass fishing, one quick spit, and a charming 3 minute fight with another Coho who spit the hook about 10 feet from the boat. And my boat-mate landed a nice hatchery hen Nook, 20+ pounder.

Now, there are days when you get that much action all day, go home and think you've done well. Fought a few, released one or two, and someone gets groceries.

The bite kind of went off, and The Man says "There's fish in here, and the lower ones will be even better". He pulls anchor and we ride to the next hole down.

We fish that a while, have one nibble that didn't stick.

The sun is full up now, it's 9 am or so as we slide into the third spot on The Man's list. We're running two rods bouncing, plus a Kwikfish that so far has caught only leaves. I break out my sandwich. If there's one thing I've learned in fishing - and I'm not saying there is, just "if" - it's that fish will bite when they know you're hands are full and you are distracted. Two bites in BANG !!!! The Kiwkfish goes off. And this is an irate fish. "Man he just hammered that kwikfish", says The Man. And this fish is just pulling line and I'm just holding on, trying to crank a little here and there but it's taking two hands just to keep the rod from heading downstream. And the fish is pulling and the fish is jumping and I'm making a little headway here and there and the fish keeps taking off. Man, what a fight ! "That's a big fish right there." Ten minutes of this action ensues and The Krakken (that's what we decided to call this beast) goes airborn again and as he lands and turns, the line parts. The Krakken has cut the 30# mono with his teeth.

Over the next hour, we boat a hatchery buck nook in the 20# range, another wild Coho that we release, a 12#-ish wild nook hen, darker wild hen that was just hooked in her lip and we release to continue her trip. In between, we rack up 3 more fights that spit the bait and - no exaggeration, at least 20 bites that the fish decided to spit and not hook up. I'm feeling like right when I'm first dropping in, I'm getting a nibble, like they're right under us, but when I'm trying to tap the bottom I may be pulling the bait away from the fish. I'm gonna just drop it with a bit of line, and wait a few seconds. I tell The Man my plan and BANG ! Another 10 minute fight and end up landing a bright chrome 20# nook hen with 2 fresh furbag slashes.

It's a hair after 10am and we're done for the day, 2 limits of chinook in the boat, my arms are worn out from fighting 10 fish, and we're not halfway down the river. The Man is pointing out other holes we could have fished if we needed to. "There was a pod of fish in that spot when we got there, and then they just kept traveling up that lane from below. I've had maybe 30 fishing days like that in my career." Tall words from The Man.

We find a gravel bank to pull into and clean the fish, as we approach there are 2 bankies working it "We're kind of fishing this area here."

"That's ok, we're done for the day, just pulling over to get things in order." Bankies land one and lose one while we're cleaning fish, wrapping rods, taking pics. Everyone is catching fish, but ours were better. The bottom of the boat looked like a crime scene. 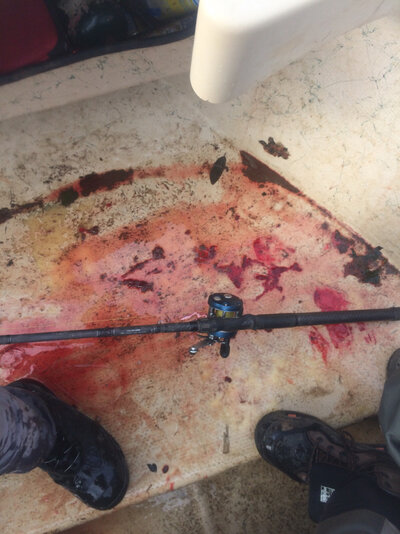 "This is the time of year to fill the freezer", says The Man. 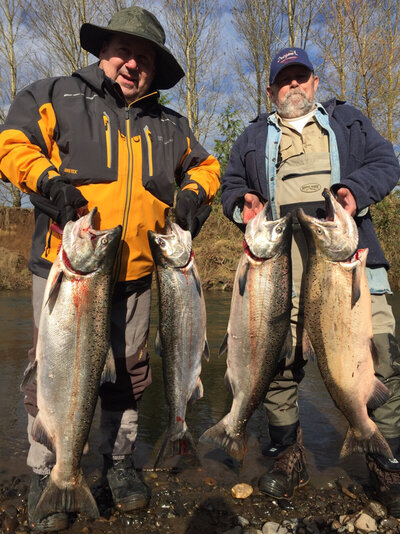 H
Hookset
That was a great report. I really enjoyed reading it.
P
pinstriper
Hmmm. Something weird with Tapatalk, only the end of the story shows.
T
TimberTodd
The Man sent me that pic yesterday to get me fired up . Awesome day pinstriper! I will be fishing with the Man this Thursday and cannot wait!
Last edited: Nov 6, 2017

Hooked Up
Another hilarious write-up Mark!
"When I got down to the bottom of the ramp there were two boats in the water, gently rocking in the current but at a respectful distance from each other. No paint was traded between them, no new dents or scratches - this is how you know there are some pros as the helm." All this is missing is a reference to volleyball!
Glad you had a great day on the river!
P
pinstriper

Hooked Up;n608111 said:
Another hilarious write-up Mark!
"When I got down to the bottom of the ramp there were two boats in the water, gently rocking in the current but at a respectful distance from each other. No paint was traded between them, no new dents or scratches - this is how you know there are some pros as the helm." All this is missing is a reference to volleyball!
Glad you had a great day on the river!
Click to expand...

If you remember, it was breaking out the sandwich that opened the floodgates for me and Fre...I mean, Spoolboy.

Whenever the fish aren't biting, change the presentation and pick up a sandwich. Book it.
C
colt
Enjoyed the read. Thanks for sharing! I am ready to get into salmon fishing myself.

pinstriper;n608121 said:
If you remember, it was breaking out the sandwich that opened the floodgates for me and Fre...I mean, Spoolboy.
Click to expand...

The fish must be watching!
You must log in or register to reply here.