bass
I hit Hagg the day before Thanksgiving since it is a nice, not too strenuous way to get out on the water. I got to the lake a little after sunrise and was fishing before 8am. It was very foggy, eerie and quiet. There was a light wind swirling the fog around. I decided that I would start the day by fishing for bass. I went over to my favorite spot and on started fishing a drop shot. On my first drop, I felt some weight and then a tug and a snapped my rod tip up and felt a decent fish!! After a brief tussle I was able to haul a nice 2lb 9oz largemouth. 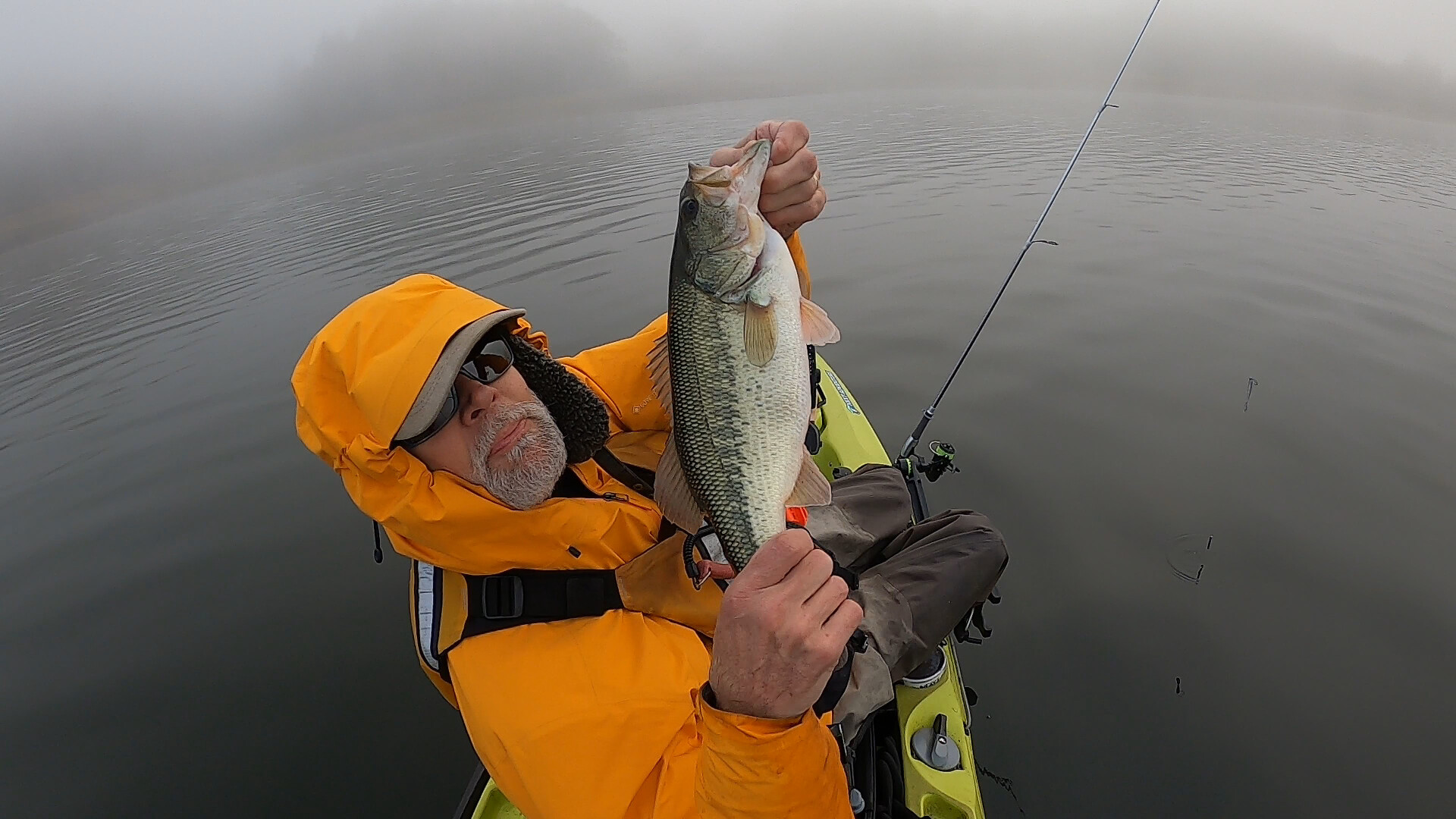 I thought, "Oh man I a going to be on fire today!!". Of course, that was a liar fish. I spend about 3 hours total fishing on an around that spot and only landed one other dinky bass. Eventually I decided I would give trolling for trout a go for a while. I broke out my trolling rods and started slowly pedaling my way across the lake (towards Sain creek arm) and then made a left turn and headed towards the dam. I had just left the no-wake zone when I had a good hit. I plucked the rod out of the holder and slowly worked the trout in. As I went to net the trout I saw it had another line tanged in it, my other line (I had the 2-rod license). The trout was a nice one 14-16", I did not measure it just eyeballed it. 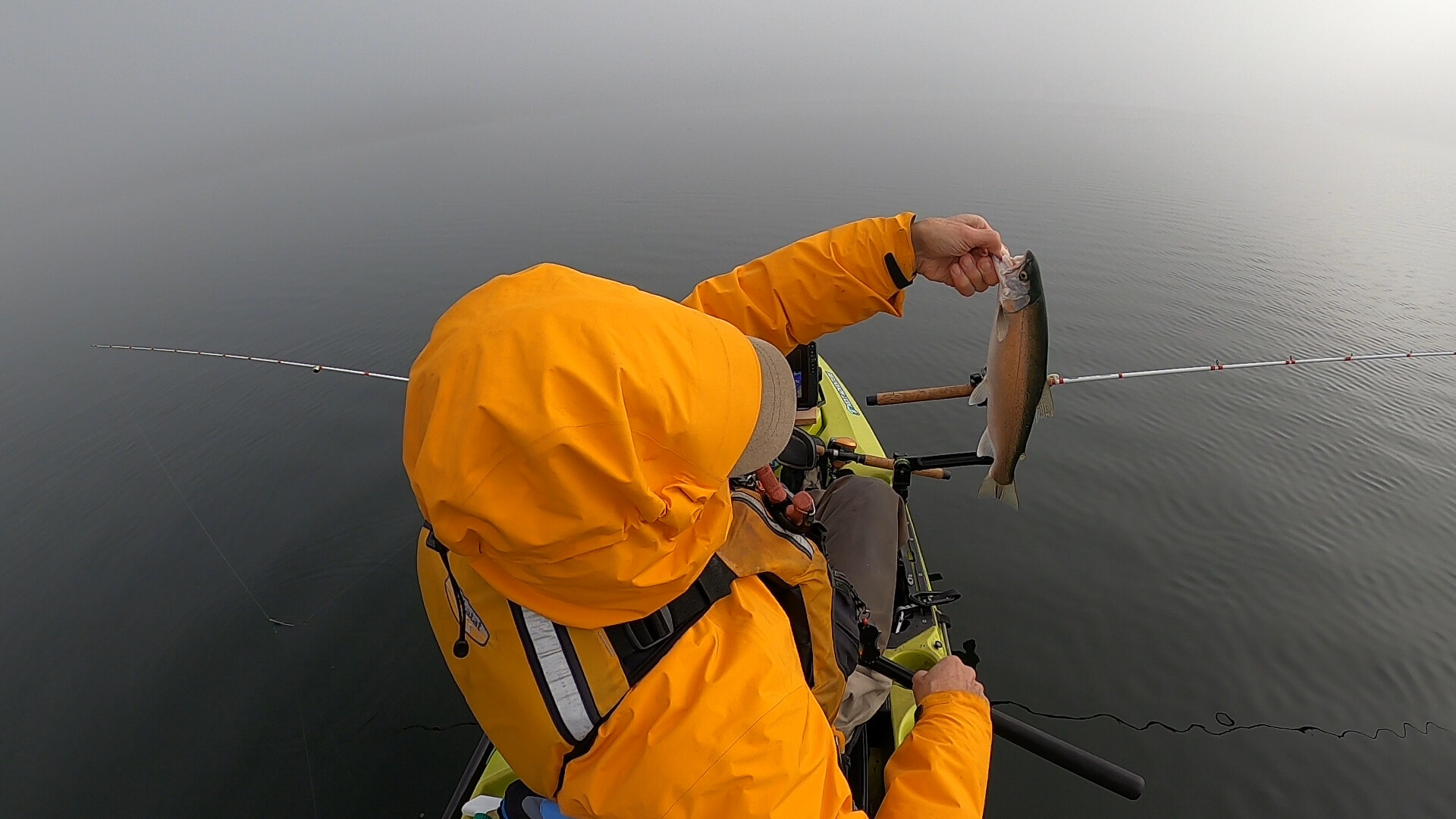 I got the two lines untangled but when the trout had pulled the other line into my rudder. When I reeled that other rod in the lure got stuck on the rudder so I pedaled back to ramp C and got that unhooked and I was back in business. During the time I was dealing with that mess the wind picked up a bit (blowing from the dam) and I was shivering and cold. I figured I would troll up to the dam and troll in the wind shadow of the dam. That ended up being a bad call.

Over the next 3 hours (troll to the dam, troll around for a bit and the trolling back) i caught one dinky little trout. To add insult to injury the wind did a 180 and was not blowing towards the dam (so getting out of the wind was a fail).

I trolled most of the way back to the no-wake zone when I caught a nice trout (thought I was recording but realized I wasn't when I released it). Also, the wind died down and the sun even broke through. Things were starting to look up. I quickly hooked up again and again but kept losing the fish right at the kayak. That was a bit frustrating but it was really fun finally having some fast action! After a short while I had another takedown and landed another decent trout (probably about a foot long).

I just kept trolling around the no-wake zone and getting bit. I missed most of the bites but I did land 2 nice crappie which is always a fun bonus catch when I am trolling for trout. At that point it was almost time for me to leave but I figured I would try to focus on crappie for the last 1/2 hour. Apparently the crappie only like me when I am fishing for trout I did not get a sniff fishing a crappie jig in that last 1/2 hour.

All the trout and the crappie were caught on my favorite rig, a 1/24oz roostertail with a trailer hook and 1/2 nightcrawler threaded up the trailer. I think if I had just stayed in the no-wake zone I could have had a banner day but I still had a fun day. Having the best action to finish the day always helps erase the memory of the long fishless periods from earlier in the day.

In other non-related to fishing news I am excited that I am finally on the transplant list!! I am still hoping that I will just miraculously recover but knowing that I am accepted onto the list definitely puts the mind at ease. The other good thing is that I felt pretty strong all day long while fishing. My bloodwork is not improving but I have to believe that feeling better and stronger has to mean something good.

Well, here is my usual terrible video from the day.

troutdude
Glad that you were able to get out and give it a go. Even happier for your transplant outlook! Congrats my friend.

Are you using Jared Johnson signature Lamiglass rods? I think that I have one or two of those rods. And/or one or two similar glass trolling rods from them. I love those things. But have given away a couple of them, to my younger friends that needed rods. (I'm getting older, and have a large collection of rods...so figure it was my time to help the younger generation...just like my grandpappy who gave me my first rod and reel).

troutdude said:
Glad that you were able to get out and give it a go. Even happier for your transplant outlook! Congrats my friend.

Are you using Jared Johnson signature Lamiglass rods? I think that I have one or two of those rods. And/or one or two similar glass trolling rods from them. I love those things. But have given away a couple of them, to my younger friends that needed rods. (I'm getting older, and have a large collection of rods...so figure it was my time to help the younger generation...just like my grandpappy who gave me my first rod and reel).
Click to expand...

The rods are Lamiglas and are the Tournament Kokanee model. I think the Jared Johnson signature models were red. I think they are really similar except that these rods have the micro-guides. I was really lucky to get a couple of them for 1/2 price on a Black Friday sale at Fisherman's Marine many years ago. I was just going to buy one but my young (at the time) son told me I should but two and I did not argue

That is awesome that you are sharing your tackle with younger anglers!

troutdude
Oh yeah...dats right. I got confused cuz I think I have one or two of the Tournament rods too (or used to have...LOL). I really love those rods in 7' or 7.5' lengths. Perfect for koke or 'bow trolling IMO.

I didn't get to do any trolling, or fishing at all, this year (except for 2 bank trips back in April) due to medical stuff. But last year I dangled one of those Lami rods, OFF the deeper side, of my buddies bass boat. While working the shoreline for bass...I caught trout with that rod!

bass
My rods are 8' which gives me a good spread in the kayak. That is the longest length that fits in the cab of my truck (without breaking down). I love fighting fish on those rods, they are so forgiving. One of these years I will take them out during the shad run. I think that would really be a blast.
You must log in or register to reply here.
Fishing by Species