Cool temperatures and consistent water levels has produced consistent catches for north coast anglers. It’s a Nestucca and Wilson River program from here on out if anglers are in search of take-home keeper steelhead. Both rivers have been fishing fair for broodstock fish, with some natives in the mix as well.

Other systems will have a mix of quality wild steelhead, along with spawned out or soon to be spawned out kelts running back to the sea. The NF Nehalem, Necanicum, the Klaskanine River, Gnat and Big Creeks as well as Three Rivers should all be seeing more spawned out fish in the coming weeks.

The Siletz has been fishing better in the recent week with more wild fish than hatchery at this point. That likely won’t change either.

The Alsea has been slow as of late, but some broodstock fish are starting to show with more regularity this week. This river too, will be inundated with some spawned out kelts in the coming weeks.

Pro guide Chris Vertopoulos (503-349-1377) saw 1 – 2 steelhead per day for his fishing week. Plugs in these lower flows continues to be a strong option for “The Greek.” You can’t deny the effectiveness in lower flows as he continues to find quality chrome. 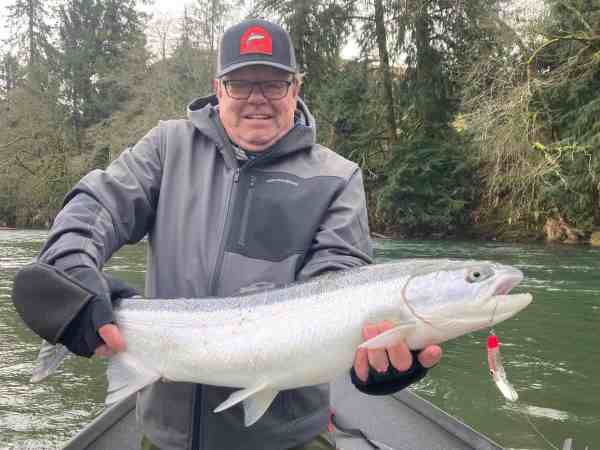 Photo: Lyle Speirs with a Wilson River steelhead. Not sure what it was caught on. With pro guide Chris Vertopoulos (503-349-1377)

The ocean has remained rough so still next to no one bottomfishing or crabbing the big pond. Nothing new here, it’s been a wild ride all winter.

Bay crabbing is fair and tides improve this weekend. Crabbing on the lower Columbia is a good idea still, but clean your catch before cooking them to reduce the chances for potential illness of domoic acid.
You must log in or register to reply here.