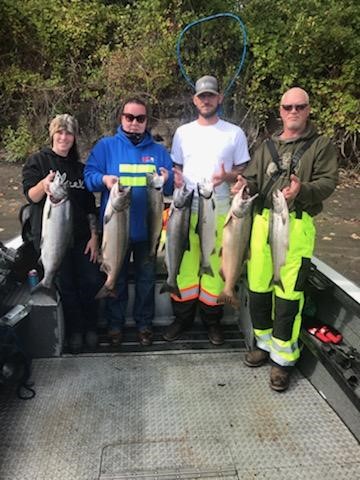 Columbia Chinook fishing slowed a little this past week, but there are still plenty of fish around. Most tributaries benefitted from last weekend’s rains, and local anglers did well.

Vancouver Metro Area
Vancouver area hoglines are still finding some Chinook each morning, but the bite has slowed a little bit. Numbers over the dam are still strong, and the coho numbers have picked up. Bank anglers are doing fair up at Bonneville Dam. However, the states are throwing the gill and tangle nets back in, for 17 mainstem fisheries, no less. Take that, sporties!

The recent rains brought plenty of coho into the local tributaries, and improved the fishing just about everywhere. The best fisheries are still the Kalama, and the Lewis River.
Get your warm water fish while they are still biting. Time is running out on those fisheries, while trout stockings await the local lakes.

Lewis and Washougal Rivers Fishing Report—the Lewis did come up a bit from the recent rains, but not much. Still, the fishing was better for a few days. The river has settled back down to being low, but the coho are still biting very well at the hatchery, and some other areas as well. Twitching jigs has been very effective in the Meat Hole, and bank anglers are getting some fish with jigs, too. The best colors seem to be patterns that have some pink. Drifting is effective in the fast water, especially in the early morning near the hatchery. Bobber and bait is also getting some fish.

The Washougal lifted a little following the rains, and fishing improved in the lower sections. Remember that the Camas Slough is closed until October to protect wild tules. Most of the fish being caught are biting on salmon eggs, and there have been some bright Chinook in the mix. Very few coho have been moving in, but the river has a late run, so the coho will not show in force until the middle of October.

Merwin and Yale Lakes Fishing Report—John Thompson of Sportsman’s Warehouse in Vancouver, (360) 604-8000), reports that anglers have begun getting the kokanee to bite by jigging, and the schools are beginning to move toward the bays where they will spawn. The Speelyai Bay area should produce well over the next couple weeks. Anglers are still getting the fish to bite trolled baits, with the depths varying some whether or not the sun is shining.

Longview Area
Cowlitz and Kalama Rivers Fishing Report—Fishing is slow and spotty, at least for keepable salmon, according to Dave Mallahan of Dave’s Guide Service (360-201-9313). He reports that he fished the river below the Lexington bridge recently, and caught plenty of fish, but almost all were un-keepable Chinook or steelhead. Very few coho have been taken. Fishing is reportedly decent to good in the Toutle River, now that it has cleared out, with the best action occurring at the mouth of the Toutle. In the Toutle, the coho are biting drifted gear, bobber and bait, and jigs. Fishing bait has been the best way to get the fish to bite in the Cowlitz, which was also too dirty to fish for a few days after the rains.

You can check river flows and lake levels, including for Mayfield and Riffe Lakes, HERE You can check the full Tacoma Power Cowlitz River Report HERE

According to Thompson, the lower Kalama is fishing very well for coho, and there are some Chinook in the mix. He has been getting some fish himself on Blue Fox Spinners, and he reports that fishing eggs has also been effective for many anglers. The river rose high enough to allow some coho to cross over the fish collection weir, situated below the Modrow Bridge, so anglers should now be able to find some of the fish in the upper reaches of the river.

Columbia River Gorge
Anglers continue to do well for Chinook and a few coho at the mouth of the White salmon River, where jigging with wobblers has been effective, and the Klickitat River, where trolling is the better bet. The Chinook are slowly entering the lower Klickitat River, but even with the recent rains the low water has prevented much of a run, and the river has been brown at times. If you fish the Klick, give Carl Coolidge of the Klickitat Canyon Market (509-369-4400) a call. He will let you know if the river is in fishable condition. Coolidge also offers a shuttle service.

See our full Oregon and SW Washington summary here.
You must log in or register to reply here.