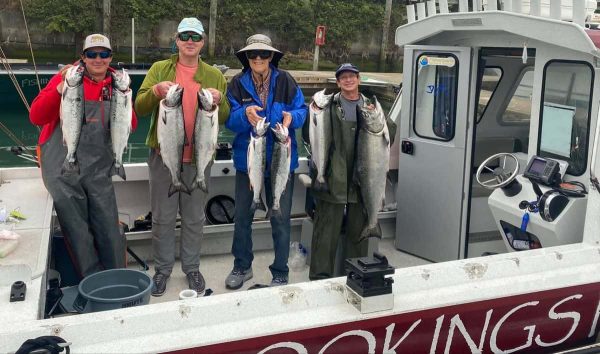 Finally the ocean winds out of Brookings has calmed down enough to get to the halibut holes and spurred on a decent Chinook and coho bite this week. Upcoming marine forecast looks promising out of Bookings-Harbor and the Rogue Bay (that’s been decent). Salmon up towards Coos Bay up through Winchester Bay is still excellent.

If you want to target halibut, then now is the time since there’s quite a bit of quota left.

Summer steelhead on the middle to upper Rogue are scattered but can be had with spinners and worms. The Rogue River River Hatchery Hole located just downstream of the Cole Rivers Hatchery Dam is now open for angling. Rogue River above the dam towards Foster Creek is a good bet to get out of the heat but might be smoky. Valley smoke this week has been bad so check conditions over at the lakes and upper Rogue system first. Best bet to beat the heat and smoke is head to the coast!

Grants Pass Pro-guide Troy Whitaker of Troy’s Guide Service (541-761-0015) reports the salmon angling on the Rogue Bay has seen a nice bite mid week with a mix of mostly Chinook and some jacks and Summer Steelhead mixed in. Here’s a nice one caught on Wednesday.

Troy said that the anchovy baits are a bit “fat” so they’re prone to blowing out the belly section so he’s been curing them in Pautzke fire brine in blue and green to toughen them up and will last longer while providing some scent.

Andy Martin- Brookings Fishing Charters 541-813-1082 reports that wind issues improved the last couple of days and the ocean should be nice through this weekend…..”finally”. Salmon (both coho and especially Chinook) catches have picked up with “quick limits” of Kings up to 30 lbs were seen Tuesday this week. He’s fishing 4 miles out in around 220 feet of water trolling anchovy around 20′-60′ down. An expected calm ocean is also lending his fishing fleet to target halibut out in 200 feet where the bite has also been good along with Petrole Sole.

Andy also said that the Rogue Bay had been good through last weekend but the last couple of days but has slowed down so far.

Tony from Tony’s Crab Shack in Bandon- 541-347-2875 said that coho fishing out of Winchester Bay is still doing well when ocean conditions provide. The valley heat this week has made for morning fog and temps into the mid 50’s and a flatter ocean. It’s expected to be similar into Sunday. Striper fishing on the Coquille is still fair above Rocky Point but is winding down.

Smallmouth bass anglers are catching good numbers of bass in the South Fork Coquille below the mouth of the Middle Fork and in the mainstem Coquille River. There is no size limit or daily bag limit on smallmouth bass in the Coquille River. It’s recommended to catch and keep as many as one can to help keep the population at bay since these fish are not salmon, trout, and steelhead friendly.

COOS RIVER BASIN: Boat and bank anglers (on the jetty) are still catching rockfish and an occasional ling cod inside lower Coos Bay. Smaller jigs with a twister tail or 1-ounce jigging spoons have been working to catch rockfish. Trout fishing in streams and rivers remains open through Oct. 31. Anglers fishing above the head of tide are restricted to using artificial lures and flies. Water temperatures are already in the mid-70s in the upper tidewater.

Stream flows are dropping and temperatures rising in the smaller streams, so anglers should take care in handling trout to be released. Trout anglers are reporting decent catches of cutthroat trout, especially in river sections that are little harder to get to.

COQUILLE RIVER BASIN- Striper fishing has improved in the upper end of tidewater all the way downstream to Riverton and are caught in low light conditions or in the dark. There is no size limit or daily bag limit on striped bass. Smallmouth bass anglers are catching good numbers of bass in the South Fork Coquille below the mouth of the Middle Fork and in the main stem Coquille River.

Umpqua River System- There are bass in most stretches of the river system- small mouth angling is fantastic now and Stripper angling on the lower main Umpqua is about over. Some Chinook have been caught as more pressure in the lower river has increased.

Get this report on Thursday nights in your inbox by signing up here.
You must log in or register to reply here.