O
osmosis
First off I would like to say that he had good customer service. He worked with me on hook selection, and did them up very quickly. I personally wanted one variety of hook - so he went out and got them for me. Again, Thumbs up there man.

On to the report/review. We hit the middle Clackamas first thing this morning. By we I mean 3 good friends and myself.
We strictly ran the new Steelhead Stalkers - Rattle Jigs! That way we could put some rod hours on them to see how they performed. To be very honest they outperformed my expectations. Not meaning the craftsmanship (they were done very well), simply on average I haven't had the best luck bobber fishing for coho.

Heres what the jigs we were running looked like, in case you haven't seen them: 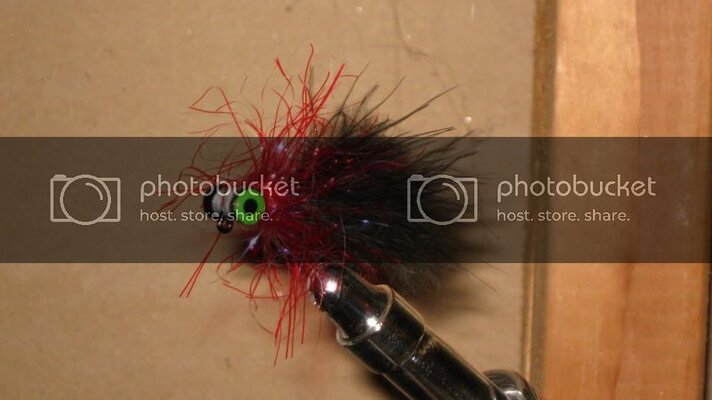 I was running a 1.5oz bobber system.
One of my buddies and I got our limits, the other guys got 2 each. It was a flat out hen hunt. We were on a search for springer bait, and certainly got it. One of my buddies kept one small buck, but all the other retained fish were females. They are on the dark side, but what do you expect from fish that have been waiting for rain for a couple weeks - we weren't all that interested in meat. All of the skeins were great!

The jigs held up very well fish after fish. We did not have a single one fall apart. There was no need to change anything other than the 8lb leader we were using. They also held the fish well, very few were lost. We just picked fish off one after another about 15 minutes apart in the same mile of water. We didn't use any scent on them either.
I can imagine these jigs twitched would work well because of the rattles. It's on the "to do" list.

These jigs earned a spot in my arsenal towards the picky fish we all love - Coho. I will be sending them past steelhead soon just to see if the rattles drive steelhead nuts as well.

Tomorrow I will be testing Identical looking jigs, Without the Rattles to see how they compare in catch rates. I understand that coho are crazy and change what they want frequently so I will compare these jigs more than just one day with each but the first round test for the Rattle Jigs went over rather well.
A
Anyfishisfine
Chad is going to have no time to fish after this. He is going to be tying jigs full time.

Good work.
J
JTLunker
Nice haul! Wonder if the bank would be as productive? Lookin forward to the control group.
O
osmosis
Thanks guys!
I'm looking forward to seeing if it was the rattle or the jig itself also! Either way they were certainly productive today.
We were on the bank today, theres not quite enough water in the clack for me to comfortably take my sled right now.
S
steelhead_stalkers
Wow! I want in on some of that fishing! Thanks for the report and for catching some fish too.
B
Bohemian
Wow! Can't wait for day 2

You know, if you keep practicing, pretty soon your going to get the hang of this fishing thing :lol:

Thanks for posting the picture.
O
osmosis
Come on up to the clack or sandy Steelhead Stalkers, We left plenty in there for ya!

Haha, yeah, maybe someday I'll know what I'm doing on the river :lol:
You're welcome for the pic, glad you liked it - now I want to see one from you soon!
Last edited: Oct 7, 2009
M
metalmania
Nice work dude:clap:, looks like those poor fish didn't stand a chance.
M
Mike123
Jealous much! What color patterns did well?
You sure you didn't hang some roe off the end of those?? :lol: JK
M
Markcanby
I went to the website but can't seem to find the Osmosis Special on the site any where.
O
osmosis
Thanks guys.

nope, no bait or scent at all. We only ran the black and red (the ones I posted a picture of).

Mark - Shoot him a PM and he will get you set up. The photo used for his link on the left of the page I believe are the Rattle Jigs, there are several color options available.

The best part of the whole day - They gave me ALL of the eggs!! They just made me promise I'd get them out for springers on the sled.
S
steelhead_stalkers
Now that is lucky! Eggs are like gold. :lol:
S
steelheadstalker31
Don't let Chad and Osmosis fool you, those jigs don't work, and I didn't catch my biggest steelhead ever on one either
S
steelhead_stalkers
That fish sure broke a long dry spell last winter! That was a true micro jigs #10 black! In cloudy, winter steelhead water these rattling jigs will be very effective.
S
solution7
The Rig

How are these jigs being rigged up. I understand it is with a bobber. Is it a slip bobber, and how much leader are you using? I love the idea of using jigs.
A
alm21

solution7 said:
How are these jigs being rigged up. I understand it is with a bobber. Is it a slip bobber, and how much leader are you using? I love the idea of using jigs.
Click to expand...

Ditto, I was wondering the same thing.
O
osmosis
In the winter most of us use 1/2-1/4oz or smaller floats, but for this test I used a 1.5 oz bobber system. I'll go as high as 3ozs with my bobber systems when I need to fish fast deep boily water.
Except in ultra small finesse presentations I run slip floats.

Nice steelhead. Is that a coastal fish?

I didn't get to fish today, so the comparison will have to wait until tomorrow! Sorry guys.
J
jeffcycles

osmosis said:
In the winter most of us use 1/2-1/4oz or smaller floats, but for this test I used a 1.5 oz bobber system. I'll go as high as 3ozs with my bobber systems when I need to fish fast deep boily water.
Except in ultra small finesse presentations I run slip floats.

Nice steelhead. Is that a coastal fish?

I didn't get to fish today, so the comparison will have to wait until tomorrow! Sorry guys.
Click to expand...

What is the corkie for in front of the float? Color?
F
Fishydog
Good enough for me, I was throwing everything I had at a thousand fish today and nothing. Just placed my order, can't wait to see if it's the jigs or Osmosis.
A
Anyfishisfine

Fishydog said:
Just placed my order, can't wait to see if it's the jigs or Osmosis.
Click to expand...

Both I'd imagine.
You must log in or register to reply here.