hobster said:
Got out on the Slaw with my buddy Ryan at Grey Ghost Guide Service today. He is the best guide up at the Whitaker run, and of course he got us into some fish. It’s been a tough year for everyone I know, was glad to get into some. I almost feel like going with a good guide is kind of like cheating, but I’ll take it

Awesome! I need to get back to that run one of these days. I have a lot of good memories learning how to steelhead fish. Every fish was unexpected and special since I didn't know what I was doing.

My wife did the logo on your guide's sled. She does a lot of them for Koffler. I saw the boat in tidewater on the Siuslaw shortly after she did it and was taking a pic of his boat from my buddies guide boat. I think he wondered what I was doing taking the pic. I felt a little foolish but that isn't uncommon for me.
Last edited: Feb 12, 2021

hobster
That’s super cool @jamisonace!
D
Dizzy Fisherman
Here’s one from over a month back.

Oldhammer
My first steelhead! From the bank of the rogue on an orange yarn ball. 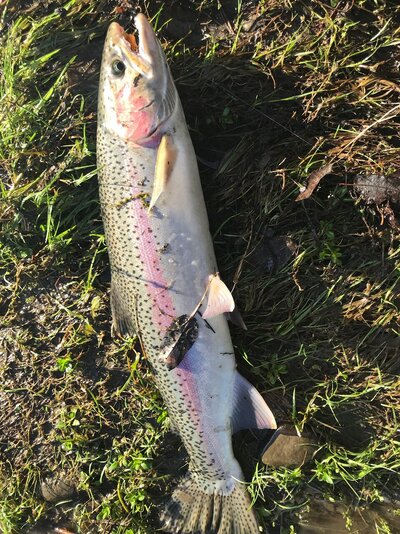 Admin
Congratulations!
C
Chrisd1990
Another beautiful fish to the bank on high quality camera this time!

C
Chrisd1990
Another fat wild hen from the bank. 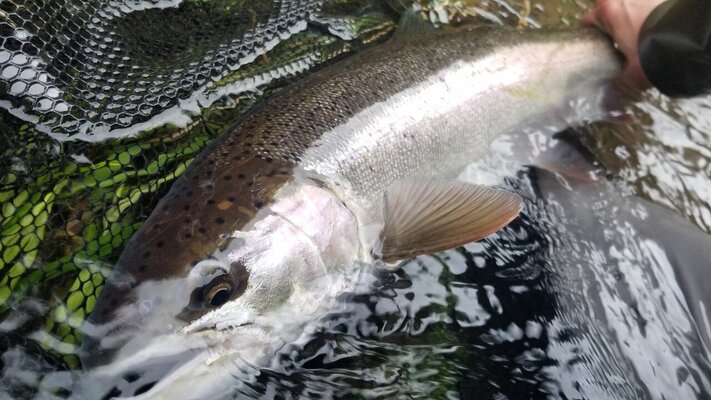 Admin
So, summer is over. Show what you got.

Admin said:
So, summer is over. Show what you got.
Click to expand...

I doubt there's much to show. Worst steelhead runs in anyone's memory.

I guess things are really bad if even you don't have anything to post.

Admin said:
I guess things are really bad if even you don't have anything to post.
Click to expand...

I'm just a hack that gets lucky on occasion but when a guide of 27 years tells you it's the worst run he has ever seen, you know its bad. And he wasn't the only one. The best guides on the river were struggling or even quit fishing. I've never seen so little pressure on the Umpqua for winter steelhead. Fingers crossed it rebounds soon.

The number of steelhead returning to the Columbia River this year is the lowest ever recorded. A group of conservation and fishing organizations say people should stop fishing for them this fall.​

Summer steelhead runs in the Columbia River are at the lowest numbers ever recorded this time of year.
John McMillan / Oregon State University
Columbia River steelhead are in hot water.
The number of steelhead returning from the Pacific Ocean to the river this year is the lowest ever recorded. As of this week, just over 29,000 steelhead passed Bonneville Dam since July 1 — that’s less than half the average of the past five years.
The low number has led a coalition of conservation and fishing organizations to call for a shutdown of all recreational steelhead fishing in the Columbia Basin for the fall season.
“This is a really, really dire year for steelhead — especially wild steelhead — in the Columbia River Basin,” said Rob Kirschner, legal and policy director for the Conservation Angler, which advocates for protection and restoration of wild fish in the Pacific Northwest and Kamchatka, Russia.
The coalition sent a letter to the Oregon, Washington and Idaho agencies that manage fish and wildlife requesting an immediate closure of recreational steelhead fisheries on the Columbia River, the Lower Snake River and their tributaries.
“The status of these individual populations are so low that we are trying to protect every eligible spawner,” Kirschner said. “Every one of these fish counts.”
THANKS TO OUR SPONSOR:
Become a Sponsor

Steelhead trout on the Columbia and Snake rivers are listed as threatened under the Endangered Species Act. After hatching in freshwater rivers and streams, steelhead migrate to the ocean and return to freshwater to spawn.
The construction of hydroelectric dams on the Columbia and Snake rivers, overfishing and climate change have contributed to steelhead population declines.
This year, as much of the Northwest has faced excessive heat and relentless drought, high water temperatures on the Columbia and Snake rivers have been detrimental to steelhead runs.
Commissioners and staff with the Oregon and Washington departments of fish and wildlife met virtually Friday to discuss options for limiting damage. Most fisheries on the Columbia require fishermen to release any steelhead they catch this fall.
“There just aren’t many more places to get significant savings,” said Ryan Lothrop, Washington’s Columbia River fishery manager.
The groups that wrote the letter to commissioners say that’s not true. They say closing recreational steelhead fisheries altogether for the fall could prevent unnecessary fish deaths — and that fishermen stand to benefit.
“[W]e simply do not believe that fishing for ESA-listed steelhead during their worst return on record is appropriate for these fish or future generations of fishermen,” the letter reads. “For a species that has provided generations with memorable fishing experiences, asking fishermen to sit a season out is reasonable and necessary considering the circumstances.”
Signatories included representatives from the Native Fish Society, Friends of the Clearwater, Wild Fish Conservancy, North Umpqua Foundation and Fly Fishers International in addition to the Conservation Angler.
Commissioners with the Oregon and Washington department of fish and wildlife made no decisions or recommendations for recreational steelhead fisheries at Friday’s meeting, but may do so soon.

jamisonace
I hope to close-out the year better than it started. We'll see.

hobster
Wow, water looks clear. Haven’t been out yet but it’s about that time

Thanks. I'm worried about this year. Hardly any fish in places that should be getting a few by now. January was a decent month for me last year before it all went to crap.

hobster said:
Wow, water looks clear. Haven’t been out yet but it’s about that time
Click to expand...

Yes, very clear but it's the Umpqua so it still fishes. River was running about 2300 cfs which is perfect for this spot but I would have liked a little more color for sure.