jamisonace
My foster son is a fishing addict and has been begging me to get him his first steelhead of the year. Took him out today in near perfect conditions and after a comedy of errors we finally got him a picture with a fish. First fish was a beast that he fought like a champ but after a couple blistering runs and some aerial shows it finally shook loose. He almost cried. Second fish was in the net fairly quickly so I had him hold the net while I rowed to calm water. I didn't secure the net to the handle and the fish thrashed the net off the handle. Fish swam off and we watched the net sink out of view. He almost cried again. Finally, third fish ran and jumped and gave him a battle he wasn't sure he could finish but with a super crappy spare net we got it to hand and he got his fishpic.

He was one stoked kid.

troutdude
That smile says it all! You da man Jamison!

jamisonace
Nothing makes me more happy than watching other people catch fish out of my boat but my absolute very favorite thing is to get people into their first salmon or steelhead. Watching kids do it is a big bonus. This is his second steelhead but it dwarfed the last one. His first was a little 6 pound hen, perfect first steelhead for a 7 year old.

jamisonace
Took a client out before work this morning. Didn't seem real fishy this morning but managed this one after a few passes. No other bites in the 2 hours we were out there.

jamisonace
Steelhead SHOW OFF is a little light on content this year. Here's a couple more to keep things moving.
C
case.bolt
Caught my first steelhead Ever today, NW Oregon coastal river. 1/8oz white jig head with a pink body/black tail worm. I've been hitting the banks of the river at least one day nearly every weekend since the start of January, was just about to hang it up for the season. I didn't even think I had a bite, thought for sure I was snagged up, reeled down and gave it a tug to pop it loose, and I got a tug back and line started peeling. Ten minutes or so of back and forth and I finally managed to get her close enough to grab her tail. Beautiful native hen, safely released and on to spawn.

No tape or scale, but I'd guess she was maybe 24"-26" long, maybe 7-8 lbs. Not a monster by any means, but the largest non-catfish I've ever caught. I did hook into another not too long after I released this one, but it popped off at the first head shake, must not have set the hook too well. Disappointing, but hey, 1/2 ain't bad.

I was so close to just giving up and deciding steelheading was not for me, but now I got the fever. Going back out tomorrow to try it again, hopefully get a quality fish to take home for dinner, or at least some better pictures.

jamisonace
Awesome! Always feels good to get the skunk off. Nothing like a confidence boost to help you find more fish. Looking forward to more photos.
D
Dizzy Fisherman
Congrats!

C_Run
Congratulations guys. Nothing to report on my end so far unless you want to hear about my 0 for 3 since Christmas sob stories.

jamisonace
0 for 3 is better than 0 for 0. I got a goose egg on the Elk on Friday. That's a long trip to not even get a line bump.
D
Dizzy Fisherman 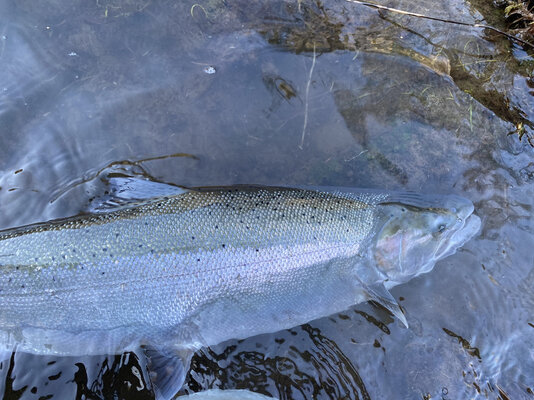 jamisonace
Good lookin shoulders
D
Dizzy Fisherman
Thanks but the pic is deceiving. It’s only about an 8 lb. fish.

jamisonace
Looks much bigger and it didn't even require a long arm. LOL Still a good looking catch. Strong work.

O. mykiss
Picked up this hen on an Oregon coastal river 3 weeks back. Of all the steelhead I e caught, she takes the cake for hardest fight. She was a chunky wild fish that taped at 33” long with a 19” girth.

O. mykiss said:
Picked up this hen on an Oregon coastal river 3 weeks back. Of all the steelhead I e caught, she takes the cake for hardest fight. She was a chunky wild fish that taped at 33” long with a 19” girth.
Click to expand...

I had a couple this year that fought so hard I thought they were springers. When I got them to the net I was shocked they were only around 10 lbs.

hobster
Got out on the Slaw with my buddy Ryan at Grey Ghost Guide Service today. He is the best guide up at the Whittaker run, and of course he got us into some fish. It’s been a tough year for everyone I know, was glad to get into some. I almost feel like going with a good guide is kind of like cheating, but I’ll take it