Spring Chinook reports are surprisingly fair for this time of year, and for the return we’re expecting back to the Willamette. Fish have been taken recently in the Portland to Milwaukie reach and river conditions should remain conducive to a fair shot at success. Herring is the bait of choice for early season springers. 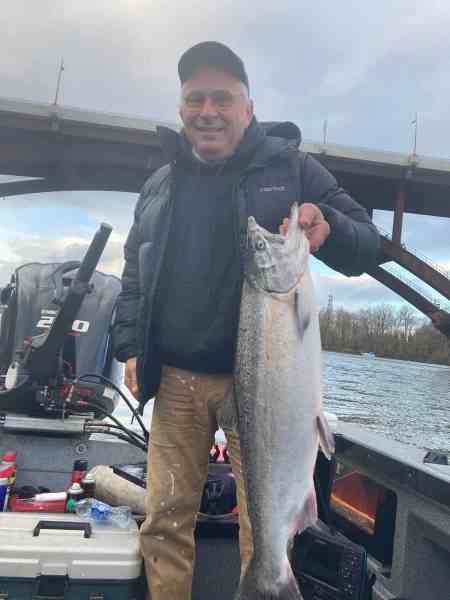 The “Sultan of Sellwood,” John Shmilenko with his season’s first springer from (of course) Sellwood, taken on a herring last week.
Still no word of mainstem Columbia springers, but that’s no surprise. Action won’t pick up until mid-March. There may be a rare winter steelhead or spring Chinook taken from the lower river, but wild steelhead would be more common for plunkers working the beach.

Pro guide Jeff Stoeger (503-704-7920) of O2BFISHN reports, “Hello All. This past week was a great week to be out fishing. The river’s condition was ideal, it was running all week at the perfect level and color and was on the drop. The river is running at 10.03 ft. at this writing and should stay about 10 ft. until the rains return. The river is running at 41 degrees which is perfect water temp to fish all methods. The river is still showing new fish entering the river daily but it’s been a fish here and there. Most of the fish that is being caught are native fish with very few hatchery fish.

The Clackamas also remains challenging with few hatchery fish in the mix. Returns are clearly depressed this season, but wild fish are making it fun on this river system. Summer steelhead should show sometime soon as well, but no one is holding out hope for a robust return of this run either.
You must log in or register to reply here.