North Coast Fishing Report - Anglers were largely side-lined this week with high water quelling effort on an already compromised return of steelhead this year. Fishing remained challenging for most days last week, when the water conditions were good for fishing. There was a rare 2 or 3 fish day amongst the guide community, but for the most part, all anglers struggled. 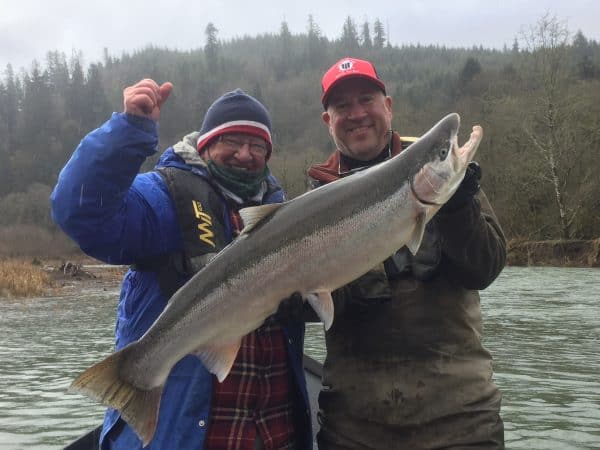 Doug Anderson (left) with his son and Pro Guide Kent Anderson with a 17-pound Nestucca broodstock steelhead commemorating Doug's 82nd birthday.
The Wilson fared OK later in the week, but river levels jumped significantly early this week, sidelining anglers for much of the week. Pro guide Rob Gerlitz (503-812-4950) had a 3-fish day last weekend, with 2 of his 3 fish being of hatchery origin.


Nestucca River anglers had bigger water to deal with and exhibited mostly the same results. Anglers putting in the hours are finding fish, but it's harder than previous years, that's for sure.


Other systems such as the Trask and Kilchis are fishing fair for wild fish with little competition to go with it. The Nehalem has remained high for much of the month, frustrating those that like this get away system with almost all wild fish available.


The ocean remains a very bad option and bay crabbing has been challenging as of late.
You must log in or register to reply here.