Reports from pro guide Rob Gerlitz indicate steelhead are still available for Wilson River anglers. Rob still has a good string of success going on his home body, catching Ed Wagner this wild winter hen on Tuesday. Water conditions were still a bit low, but Rob’s success can be attributed to fishing the water thoroughly with light gear and subtle offerings (single soft beads in this case). Here’s a nice hen that went back to spawn: 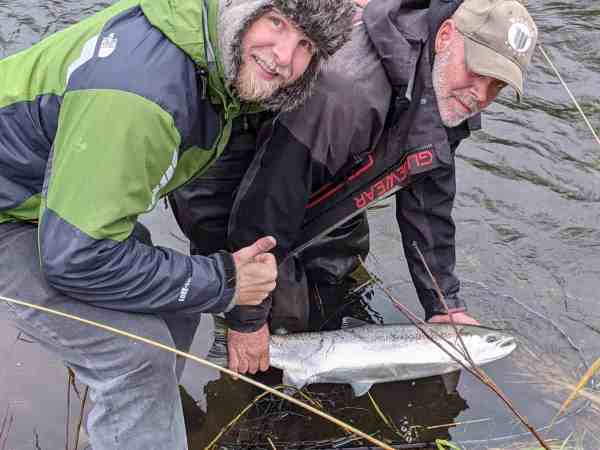 Other north coast systems are also producing mediocre results for early returning steelhead although one of the more popular north coast options, the North Fork Nehalem, was rumored to be pretty challenging in recent days.

The upcoming rain freshet should be a game changer however. The North Fork Nehalem, Three Rivers, the Necanicum and Klaskanine Rivers as well as Big and Gnat Creek should all see a fair surge of early returning steelhead this weekend. The smaller streams will fish better in higher water, while the Wilson and Nestucca will fish better early next week. The better fishing for wild and broodstock fish (Wilson and Nestucca systems) will take place in February and March.

The Nehalem does have a rare winter run already, but that will go out after the weekend.

The ocean remains upside down, again shutting down bottomfishers and ocean crabbers. The commercial fleet is striking so ocean crabs remain untouched, but that will likely soon change. Meanwhile, the lower Columbia River remains a good option and softer tides this weekend will make for some good Christmas Day appetizers, but watch Saturdays wind if you go.
Last edited by a moderator: Dec 19, 2020
You must log in or register to reply here.