The most recent rain has brought some fresh Chinook to the north coast, and I’ll emphasize “some.” Pro guide Rob Gerlitz landed his people a couple of nice Chinook on Wednesday, November 25th. Drifting from Mills Bridge to Sollie Smith, Gerlitz landed these two nice Chinook and had a couple of incidental chum salmon to boot. It’s a rare success story, but a sign that not all hope is lost. 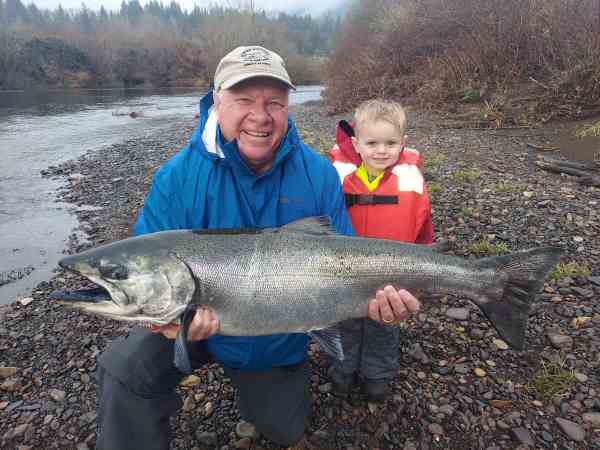 The Wilson and Kilchis remain the best two options for late-season fall Chinook, but anglers will have to work for them this time of year. The tidewater reach has been challenging as well, but persistence is paying off for the few anglers putting in a full day’s effort.

Other river systems are largely done for the year, with winter steelhead still several weeks away. There should be some early arriving winter steelhead on the North Fork Nehalem, Necanicum, Three Rivers and Big Creek near Astoria. Thanksgiving is the traditional kick-off for these early returning fish and it’s likely that this weekend will yield the north coast’s first winter steelhead.

Crabbing on the lower Columbia remains excellent, but a large tide exchange this weekend will make the window of opportunity short. None-the-less, limits are possible if you pay attention to your gear.

The ocean will remain angry for the foreseeable future. The commercial crabbing season is on hold, which could give the recreational fleet some great opportunity if the ocean weather calms down.
Last edited by a moderator: Nov 28, 2020
The Guides Forecast - Helping you catch more fish
You must log in or register to reply here.

Winter steelhead yet to show in metro areas, available on the coast however