Blue Fox Spinners is one of the easiest techniques to fish. If you have fished at all you will know how to fish a spinner.

Cast it upstream and slowly put tension on your line as it swings downstream. just makes sure you feel the blades working and you are fishing.
D

cool !, ive got some blue fox , any colors and size you would recommend ?

In the immortal words of Oregon Spinner fishing legend Jed Davis..."if you don't lose a few spinners on each trip...then you're not in the strike zone" (paraphrased). In other words work them slowly and deeply. Even allowing them to "tick" the bottom a few times per cast.

Spoons like Little Cleo's are also easy to use, and can cover lots of water. Pretty much the same technique per the comments above.

Good luck and let us know how you do.

P.S. Don't give up if you don't catch any. Summer run steel are not easy to get dialed in. Typically it takes lots of time spent figuring it out; prior to success.
D

appreciate the advise guys , is there anywhere on the clackamas you would recommend ?
F

I'm also noob to steelhead fishing I caught my first winter steelhead ever, and several others, but I got skunked a dozen times before getting my first one so don't be discouraged if you skunk out a few times. Also, look up water levels, fish counts, and any information that can help you determine the location and the amount of fish in the section of river you plan to fish. Try and learn the different kinds of steelhead water if you don't already know that. Get up early I'm a true believer of the early bird gets the steelhead. Another thing is to try new techniques, baits, and setups. I got my first steelhead float fishing with a nightmare pattern steelhead jig, but a ton of different color patterns work as well. You can also try steelhead worms, corkies, yarn, soft beads, and hard beads. The two biggest ones I hooked were on lures. I used the eggs from my first steelhead to catch a pair of steelhead. Ghost Shrimps and coon shrimps also work well as something to add to your jig or just fish by itself. I had blast trying out another technique called drift fishing. All I used was a shrimp and although I didn't hook a steelhead I had a fun time catching cutthroats with it. When using bait, remember it's more likely to gut hook fish, and on some rivers, it's illegal to use the whole year, or during certain periods, and the cure used on some eggs can kill baby fish . When it comes to rods and reels, in my opinion for noobs, it's best to just start with what you have or buy a less expensive setup. For line, I used a 30-pound high visibility braid and a 12-8 pound leader for winters. Some people also tie a buffer line on, but I was too lazy to do that lol, but it might help. Now assuming you're probably going after summer steelhead, I don't know if that would work, but I think most people go for a lighter less visible set up in the low water conditions during summer steelhead season. Use youtube, online articles, magazines, books to learn additional information. Also, find a river that fits all your needs and stick to it, and learn that river. Each creek and river's run is slightly different, so learning the behavior of each river run can be advantageous. Keep in mind to know the rules and regulations. Also, make sure you're fishing and accessing fishing spots by public lands. be safe, I've fallen on my behind and slipped down multiple times thankfully I never hurt myself. Talk to other fishermen if they seem friendly. I'd recommend buying the steelhead fishing essentials book it helped me learn a lot. 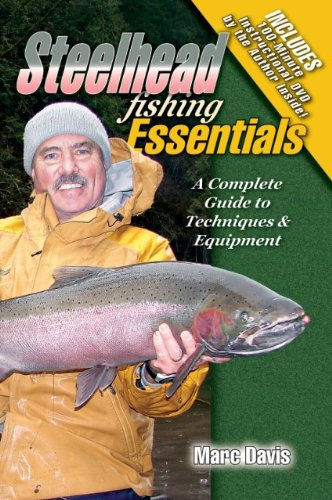 wow thank you for all the info ! I will get that book as well !
You must log in or register to reply here.

Another newb wanting to get into steelhead fishing help