Lakes this time of year within 2 hrs of Portland?

S
shannonlab
Relatively new to fly fishing from a boat on lakes (previously mostly walk/wade or floats on rivers). My wife (who usually catches more fish than I do!!) would like to take our new boat (15' modified v-hull) out for a day of fishing next weekend. Our boat has a 20hp motor, but also is fully outfitted with oars (it rows well) for lakes that don't allow motors.

Any suggestions for lakes this time of year within a 2 hour drive of Portland would be greatly appreciated.

Many others as well.

bass
Detroit is about 2 hours away as well. If you have a WA license as well that opens up a lot more options.
S
shannonlab
Thank you for your replies.

I believe the boat ramp at Timothy Lake is closed now.

And yes, we have WA licenses, but aren't familiar with lakes up there within 2 hours of Portland. Any suggestions?
P
pcstock
There are literally hundreds.

Try Lake Takhlakh. Good trout fishing. No motors though. And no motors on most of the smaller lakes.

bass
I don't fish the WA lakes for trout but the WDFW website seems really good when I have looked at it. I know that Lacamas gets stocked and has some browns as well as rainbows. Battleground lake is another lake that gets well stocked (I think no motors on that one). You can go to the WDFW site and poke around.

https://wdfw.wa.gov/fishing/reports/stocking/trout-plants
The above might be useful but you can also just look for lakes that have trout:

Here is the regions map:

shannonlab said:
Thank you for your replies.

I believe the boat ramp at Timothy Lake is closed now.

And yes, we have WA licenses, but aren't familiar with lakes up there within 2 hours of Portland. Any suggestions?
Click to expand...

Lost Lake, Trillium, Frog, Clear once this first round of snow melts and refills it. Lawrence is opening back up on October 16 but will close again for the season on Halloween. Lake Harriet is probably the best fly fishing lake on the mountain.
S
shannonlab
Thank you all for your help and suggestions. We greatly appreciate it.

We look forward to a lot for exploring with our new boat.

troutdude said:
Maybe Kingsley Reservoir, SW of the Hood River Golf Club, is close enough. It produces some beasts from time to time.
Click to expand...

I believe Kingsley is still closed. Pine Hollow is fishable. But I can't say I'd choose either of those over the lakes on the actual mountain, especially coming from Portland. Closer, bigger fish, wild fish in every lake.

olshiftybiscuits said:
I believe Kingsley is still closed. Pine Hollow is fishable. But I can't say I'd choose either of those over the lakes on the actual mountain, especially coming from Portland. Closer, bigger fish, wild fish in every lake.
Click to expand...

And was just tryin' to think of options.
C
cakkee
I love to fish.

Grant22
I fish pine hollow a lot and there are some absolute brutes in there, Lots of small fish that you have to pick through but once the water comes back up fish with a woolly bugger, leech pattern, or a streamer behind the row of islands and the creek inlet on the northwest corner of the lake. usually you can sight fish them and I personally have caught 10lb+ fish in two feet of water. 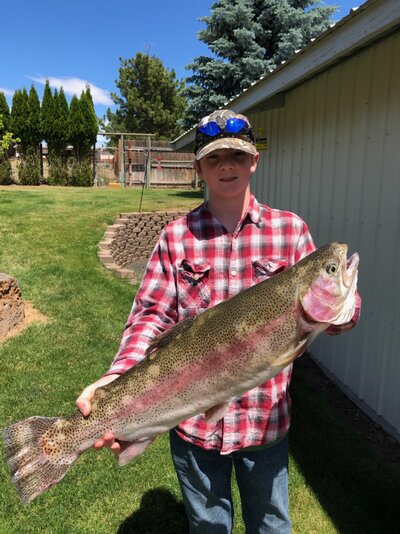 Last edited: Nov 5, 2021
D
Diamond Lake Charlie
Many years ago we lived in Tacoma and found a lake called Elbow.. Mostly Bass but it also had Crappie in it. We used to fish it in a 10 ft tri hull with a 3 hp Sears. Before I got the boat we would rent plastic boats.. Had a lot of fun with my son. If I remember right it was south of Parkland. Couple of things I should tell you. At that time 80-82, there was nothing such as a privy, camp ground or even a boat ramp. I think the term Loggers Lake would fit the term best, as I think it was made by putting in a road for logging, however it was a very nice little spot. My son and I found it one day while cruising the back woods in my 41 ford jeep. we could see people going to and from the area and some had boats so we found a skid road going in that direction and followed it. The trick was getting out and finding our way back, we had a lot of fun in that old ford. It is now in a museum in Michigan
Last edited: Dec 25, 2021
You must log in or register to reply here.

Help me pick a boat!

What do you think of this?