I had a st-urgin' to go fishing on Sunday

Most Featured
I had not been fishing in a couple of weeks and my previous trips had been to Hagg. I was torn on what to do and where to go. Then deep inside of me a feeling started to grow, small at first, but it just kept growing. Finally I was totally overcome with a st-urgin' to hit the Willamette. Even then I was not sure whether I should fish upriver or in the harbor. In the end, the thought of pulling my kayak up the old ramp at George Rogers park made Swan Island seem like a really good idea.

I headed out and as I did I started marking fish pretty quickly. Maybe sturgeon, maybe carp, maybe mutants. It is hard to tell in the harbor. I stopped and cast out and waited. I counted to 100 without a bite and moved a few hundred yards further out. Tried again with the same result. I headed out closer to the mouth and this time I started marking more fish and the looked like sturgeon on the side imaging. 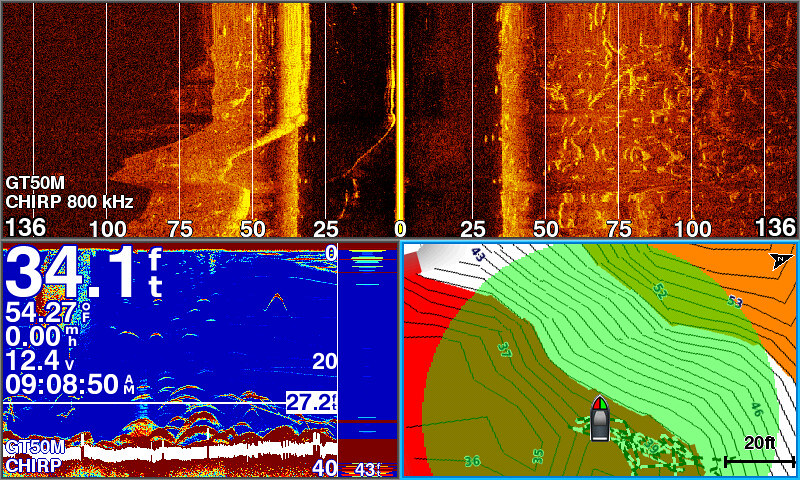 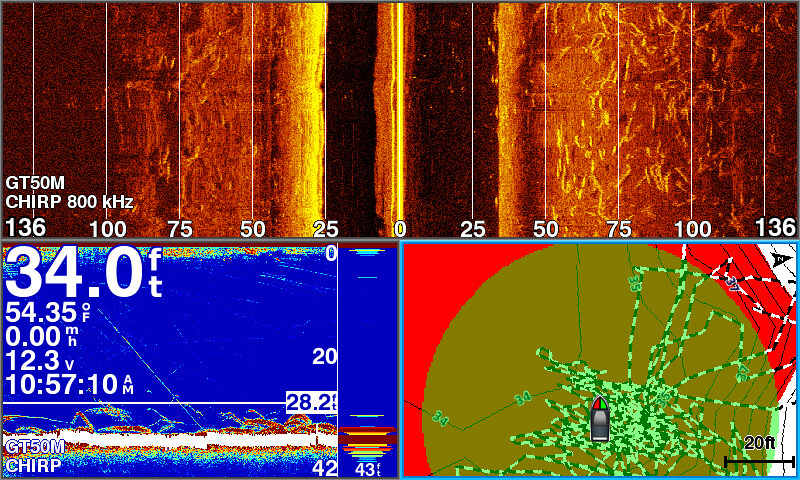 I felt more confident as I cast out at this third spot. Almost immediately I felt some line rubs - that staccato-like twanging on the line that indicates that there are sturgeon in the area. I focused in and tried to block those out and feel for the thunk, thunk, thunk of a fish eating my bait. Within a minute or two my diligence was rewarded and I felt a fish pick up my bait and start to swim off with it. I tightened down and started reeling hard to set the circle hook. Any doubts and fears I had about picking the wrong spot to fish evaporated as my rod tip buried in the water. 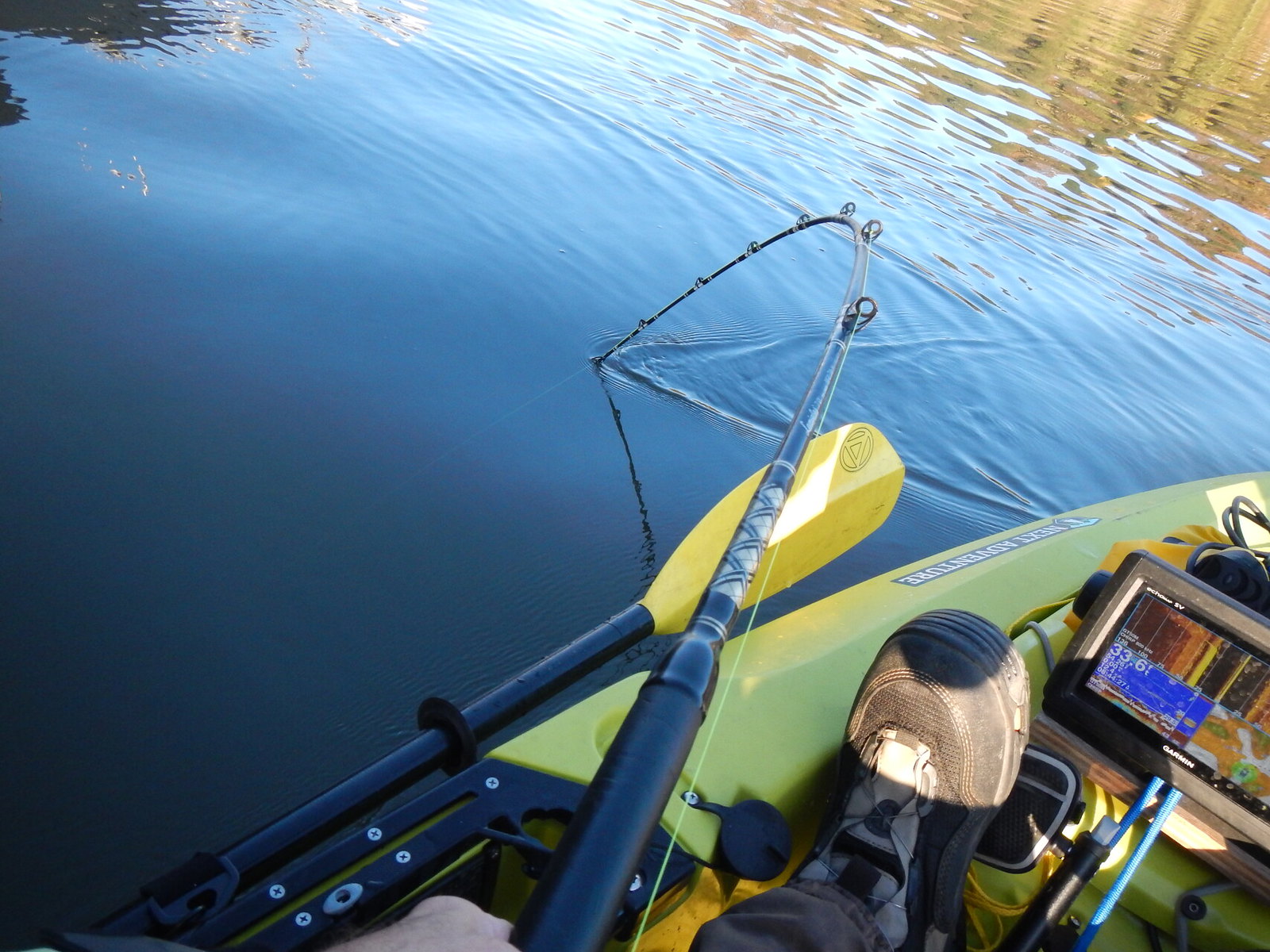 I have to say that when the water is in the 50s and 60s (54 on Sunday) sturgeon fight like demons. That fish pulled me back and forth across the harbor a couple of times while I leaned on it with all my strength. There is a feeling of hopelessness in those battles. I am pulling as hard as I can and I can't move the fish at all. If the fish swims off I can regain line until I am over top of it, but then I am back to fighting an immovable object. There are times when I am fighting an oversized that I think that I am no match for the monster on the end of my line and this was was one of those times. The battle went from being exciting and fun to being one filled with fear and tension. I could do nothing with that fish for a long time. I would pull hard and all I could do was put more bend in my rod, I could not move my rod tip at all.

However, one advantage humans have is our endurance. I can only hope that the beast on the line feels an equal level of helplessness. That is the mantra I repeat in my head during these battles. The battle rage for a god 10 or 15 minutes, but eventually I was able to prevail. The fish was somewhere between 5 and 6 feet long and fat and healthy. 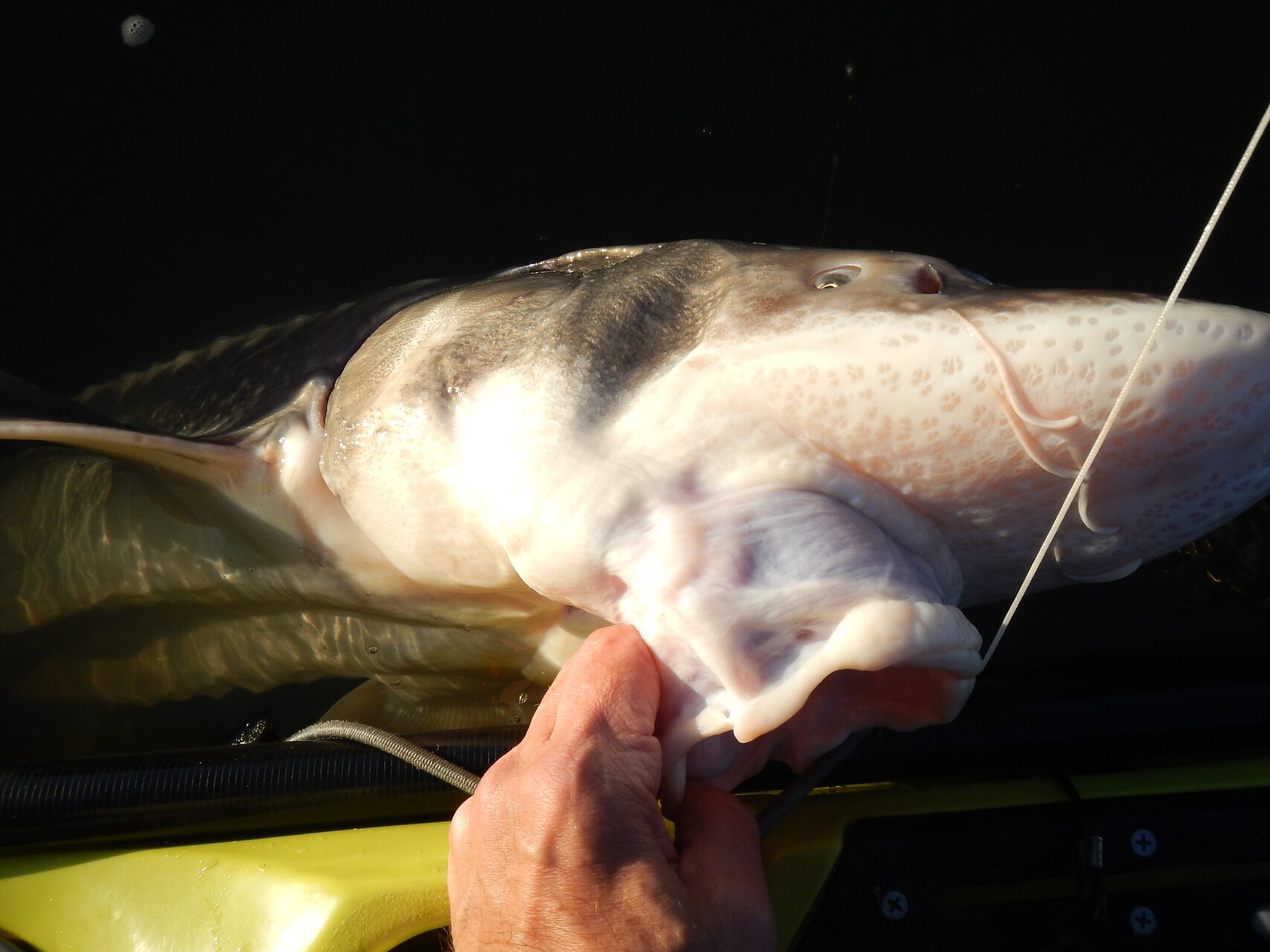 After that fish I thought, maybe I don't need to rush out to fish in the current after all. I had found a good-sized school of sturgeon and they were biting! It is so frustrating to find a big school of sturgeon in the harbor that don't seem interested in feeding. I was thrilled that I had found biters that easily. The morning was epic. I would cast out, filter out the line rubs, feel a fish pick up my bait and then it was off to the races again, and again, and again.

The fish were all decent sized. That first was my only oversized from that area but almost all the others were either large shakers or keeper sized. I have to admit that after a while it was getting a little boring. The morning was broken up by a visit from Mr. Whiskers though. 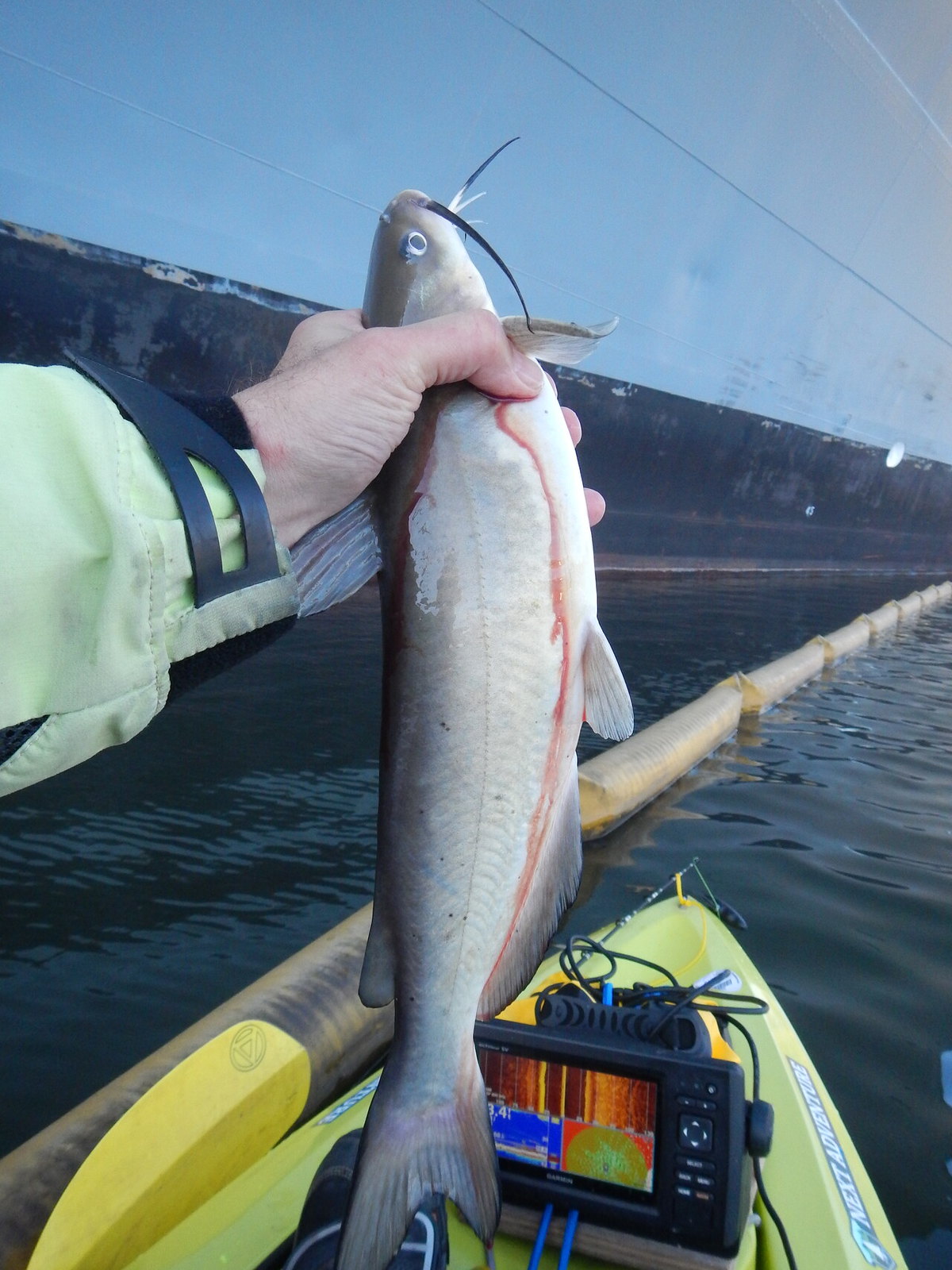 Eventually, there were a few other boats in the general area but they did not seem to be on biters like I was. I finally decided that my arm were getting tired and that I needed a change of pace and wanted to try some bass fishing so I pedaled out to the closest boat and told them that there were a bunch of hungry sturgeon over where I had been fishing. They seemed like they were having a fun time but were happy for the tip. They insisted that I take a bump of their whiskey - it would have been rude to refuse. I am not the biggest whiskey fan in the world, but out there, on the water, talking with those guys, it was just down right amazing. I hope the bite stayed hot for them.

So I pedaled out to the river and started throwing some soft plastic lures along any steep rock I could find. I worked my way all they way down to the RR bridge. I spent about 2 hours getting casting practice, but some days I can't make the bass bite by just wanting them to. Man, that makes me mad!!

I was thinking of just heading home for the day and started pedaling back when I started marking fish out in the current. By now the incoming was under way and it was that magical combination of marking fish and current that I just could not resist. 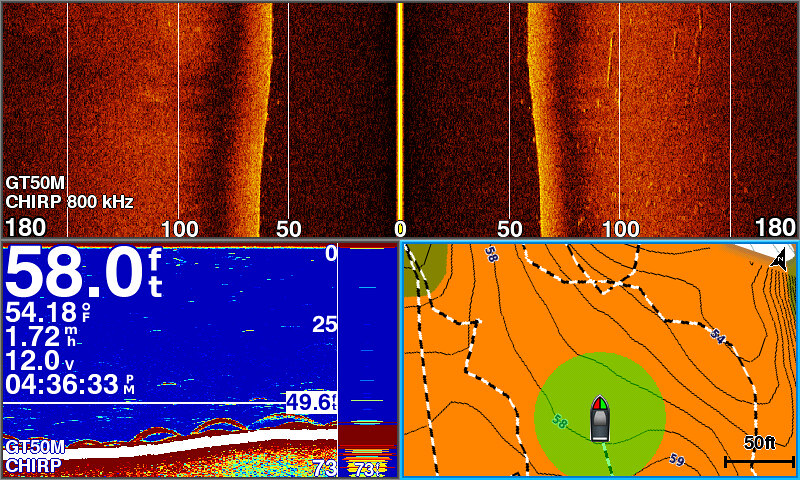 You don't mark the numbers like you do in the harbor but when you are marking fish like that out in the current you know you are in for a good time. I dropped anchor and cast out and immediately hooked into my second oversized of the day. After another long and grueling fight. I had the fish almost there when the hook ripped out. I was just stunned. All that work for naught. Hey, that is fishing - the part that sucks

I went back to my buoy and tied off again. The bite was really good in that area. I could not even count to 60 before having a fish chowing down on my bait. For me, catching them out in the current is just so much more fun than in the harbor. I am not worried about hanging up, breaking off, catching disease. It is just mroe pleasurable! Finally it was getting to be a bit after 4pm. I said to myselft, "This is your last bait".

I cast out and immediately caught a decent fish, but it was hooked right in the lip and my bait was completely unmarred. I had to cast out one more time. Let's just say it was a great (and painful way to end the day).


After that I could barely pull my anchor up. I was done for the day. I pedaled back and as I entered the harbor there was a boat getting ready to leave and they told me I should try to fish there because they had just caught 6 oversized. I just told them straight up that I could barely life my arms. I was not sure I was going to make it up the ramp at the end, but I put my head down and just took it one small step at a time, just like fighting those oversized.

I took a fair bit of video and trimmed it down but this is still pretty crappy. This is like 43 minutes long, but if you like root canals you might be able to watch the whole thing. Thanks for reading and I hope you at least enjoy some of it. I need to figure out how to improve the quality with my camera.

@bass nice! Your gonna get a hernia LOL!
B

Most Featured
@EOBOY I am still sore from that workout. I don't think there is any point in ever retiring because it takes me a week to recover from one of these trips anyway

EOBOY said:
@bass nice! Your gonna get a hernia LOL!
Click to expand...

There's mesh for that! <I speak from experience...lol>

Well done! Thanks
B

Most Featured
Thanks @Markk, but the real stars are the sturgeon who agreed to participate

I've never fished for sturgeon. What is your preferred (or their preferred) bait?

What's your rigging look like. Sinker at the bottom with lateral hook? Spreader?

Bob Budesa said:
I've never fished for sturgeon. What is your preferred (or their preferred) bait?

What's your rigging look like. Sinker at the bottom with lateral hook? Spreader?

I always use 1/2 anchovy. My friend who does just as well uses 1/2 herring. Neither of us thinks that the particular bait matters very much. The key is to move if you don't get a bite. Don't sit in a spot waiting for them to bite, go find the biters!

I made a short video a few years back on rigging.