Most Featured
Sunday the 7th was a cool rainy day at Hagg. The wind was quite calm until 2 or 3pm and then kicked up a bit. The rain was very light with an occasional heavier spurt basically conditions were just about perfect.

I launched from boat ramp C and had my rods in the water by 8:30am. The bite was just incredible right from the start. I was trolling two rods. One had a 1/24oz green roostertail and the other had a 1/24oz pink roostertail. Both setups were fished with a 1/8oz dropper and set 50' back. I also had a trailer hook on each with a couple of inches of mono. I threaded 1/2 nightcrawler on each setup using a worm threader so that the mono is inside the worm and the trailer is sticking out the end. The other end I hook onto one of the trebles.

I had a hard time keeping two rods in the water for most of the day. More often than not I would hook a second fish while reeling in a first. I did not land many doubles but the action was the fastest I have ever had on Hagg.

Lots of nice sized fish in the 12" range: 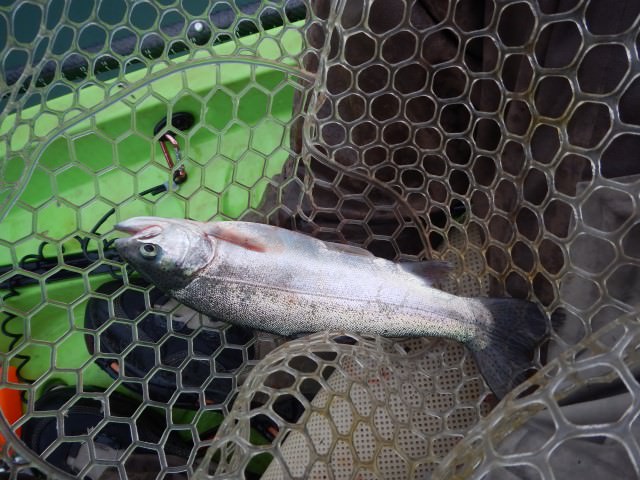 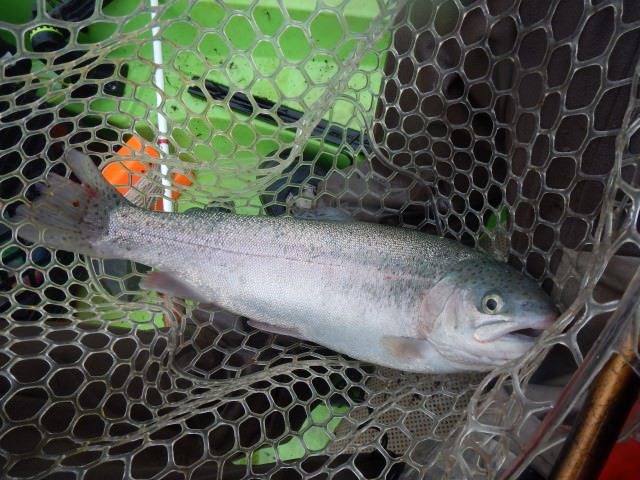 It was mid-afternoon and I was at 39 fish and I had decided if I catch one more I would stop, but I ended up actually landing a double which boosted me to 41. I had no choice but to go for 50.

As I released by 49th fish my other rod just whipped down and a giant trout launched itself into the air. I picked up the rod and that is by far the biggest fish I ever had on that kokanee rod. On the next jump it through the hook, but that fish was easily 5lbs if not more. Just an absolute beast. That was a huge bummer.

I only put out one rod and in anticlimactic fashion hooked and landed my 50th fish - which was a nice 14 incher. Normally I would have thought that to be a great day ender, but the bitterness of losing the giant was still too fresh.

In retrospect (and after reading a report on another forum) I realized that both the 18" fish and the monster were hooked on the inside rod while making a big turn. In that situation, the lure will sink a lot deeper and I think that perhaps if I had run my rods deeper all day I may have ended up with a lot of big fish. Shoulda, woulda, coulda - that is fishing.

The coolest thing during the day is that it was pretty easy to figure out what the fish were feeding on (fish were busting the surface all day long). I was constantly cleaning up bluegill fryf that the trout kept yakking up into my kayak. 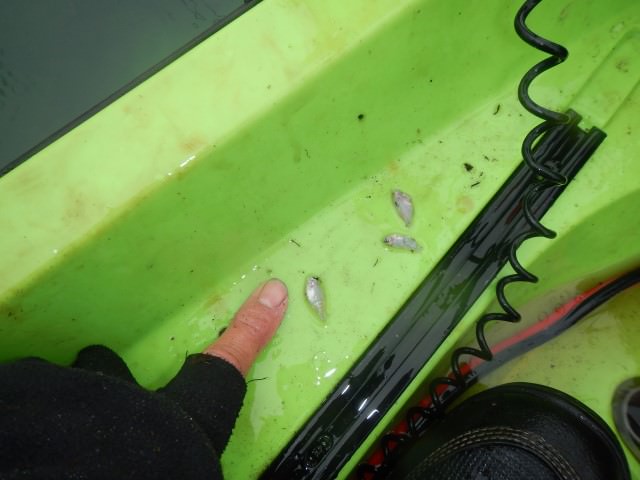 I think anyone fishing Hagg might do well to match the hatch with these little guys. I was hoping to go back out this weekend but re-injured my shoulder again during the week. I am on injured reserve for a while. I sure know what I am going to do next fall!

I hope this report helps. I am not sure how well the fish bite under the sunny skies we have right now, but I can definitely say that they go nuts all day long if we get a rainy day.

Last note, is that color did not seem to make a difference nor did the wind. When the wind kicked up the bite just continued on at about the same pace. The only place I did not catch trout was in water shallower than 12'. It seemed like the no-wake zone was pretty much paved with fish in water deeper than 12'. I did spend most of my time in 20' or more, but it seemed as long as I was in 12' or more I caught fish.
Last edited: Oct 17, 2018

Moderator
What a fantastic report! Sorry to hear that you're shoulder is giving you fits again. But I'm glad that you had such a great fish fest!

Most Featured
Thanks TD. That was by far the best fishing I have ever had at Hagg.

I have always wondered what the trout were chasing so aggressively at the surface. I think it is safe to say that I have put that mystery to rest for myself.

I have immediately started back at square one with my shoulder and I feel like it is already healing up a bit. Last week I felt like I might not be able to get the kayak out again this year, but now I am hopeful.
M

As TD had mentioned...very nice report! Sounds like a day to remember. Thanks for sharing.

Most Featured
Glad to share info Mr. B! BTW, did the photo links work? I wanted to test them at work but apparently, they are blocked. I guess those trout were just too sexy
M

LOL!! Sexy Trout would make a fun forum handle...I couldn’t open them on my tablet

bass;n614246 said:
Glad to share info Mr. B! BTW, did the photo links work? I wanted to test them at work but apparently, they are blocked. I guess those trout were just too sexy
Click to expand...

yeah they were blocked! Sorry to hear about the shoulder, I watch mine carefully but doesn't always work.:sad:

Nice read John! Thanks for sharing. Go easy on the shoulder my friend you don't want to miss the winter runs. Tony

Most Featured
Thanks, EOB and CC!

Hey TD I am thinking more along the lines of David Attenborough narrating: Hagg Lake,... Home of the Sexy Trout. We sent our crew to the state of Oregon in search of the elusive sexy trout. ...

Also, I updated the image links and I think they should work now. I think anyone fishing Hagg should check out the picture of the bluegill fry. The trout think they are yummy!

Hmm...maybe early next spring would be good to troll "bluegill plugs", about 2 - 3" in length?

Hmm...maybe early next spring would be good to troll "bluegill plugs", about 2 - 3" in length?
Click to expand...

I ordered a couple of Strike King Bitsy Minnows. They are 1.25" crankbaits. The color: Sexy Shad. I am not joking, I feel like it was the universe telling me what to do.

Moderator
bass That's HYSTERICAL!!! Now watch you limit out, with those. Just don't tell anyone that you went fishing, with "Sexy Shad".
You must log in or register to reply here.
Top Bottom