Most Featured
I was sick and tired of cleaning grass of my lures so I decided to skip the Willamette and hit Hagg instead. It had been a really hot week but we were on 2nd day of a cold front so I was not expecting a great day. I was tempted to bring some trout gear but I knew that if I did I would do the easy thing and just fish for trout. I made my plans to fish for bass and stuck with it.

I was surprised when I got to Hagg and saw that the water temp was ~67 degrees. The Willamette the week before had only been in the mid-50s and I figured Hagg would be a little warmer than that but I was way off.

I launched at boat ramp C and started fishing towards the Scoggins arm. On my 2nd cast I hooked a nice-sized smallmouth on a hard swimbait. I was pretty fired up since I was expecting the fish to be in a neutral to negative mood at best and not really chase hard baits very much.

Turns out that the first fish was one of those well-known liar fish. I did not catch a fish on a hard bait all day long.

After a dozen more casts I decided to pick up a wacky-rigged 3" senko and go back over the area. I caught a small smallmouth (first fish on the video). If you watch carefully you can see it puke up a decent-sized little perch right before I land it.

After that first flurry of action I probably spent an hour or so without a bite. I kept cycling through my takcle box looking for something that the bass would find appetizing. I tried a spinnerbait, a 1.5 crankbait, hard swimbait, jerkbait, soft swimbait, 3" wacky rigged senko, and a ned rig.

Eventually as I worked my way down the bank I came to a min-cove where I have done well in the past. I dropped my anchor and decided to cycle through eveything I had tied on to see if it was a problem of me not finding fish. There should be some fish in this spot.

I was amazed that all that action had not spooked that fish and that it had taken 3 casts to get it to bite. At that point I realized that the fish were in a negative/neutral mood and that if I wanted to catch something I would need to fish slowly and carefully.

So that is what I did. I alternated between the wacky rigged Senko and the ned rig and carefully combed the water. I got to another favorite spot of mine and within a handful of casts I caught my first largemouth of the year! 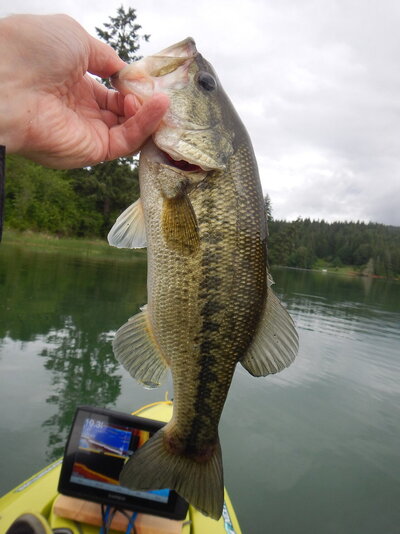 Decent in length but really skinny with no signs of spawning (tail looks perfect).

I kept working my way down the stretch being as quiet and stealthy as I could when I felt another pick up on the ned rig and saw my line moving out. I set the hook with a little too much pepper and POP goes the weasel.

I passed the time while re-tying by berating myself. With all that out of my system I calmed myself and carefully eased myself back to where I broke the fish off.

First cast and I start working the lure back when I seem to lose contact with it. I reel a little trying to regain contact with the ned rig when I see that the line is once again heading out towards deeper water. I set the hook firmly but definitely more controlled and I have my second largemouth of the year! 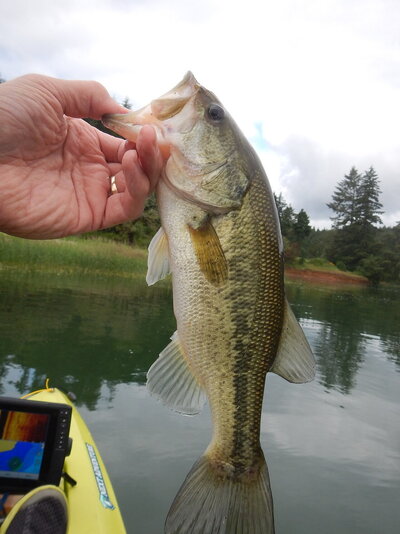 To be honest at that point I had already caught more bass than I had anticipated for the entire day (given the cold front).

I made a few more casts to the spot without a bite so I decided to change my presentation angle. First cast from a different angle and the same thing once again. While my ned rig was sitting still on the bottom a bass picked it up and started to swim into deeper water.

I once again made a good crisp hookset and this time I could feel some shoulders on the fish. She put up a good account for herself against the light spinning rod but after a short battle she was mine. She was extremely skinny and only weighted 2lbs 14oz. I really have to believe if that fish was fat she might have been pushing 3 3/4lbs but the scale doesn't lie.

In the video you can see me weight the fish and release it. As soon as I did I said "oops, in all that excitement I forgot to take a picture". At least the video is OK.

I fished that spot for a while longer without any more action. I kept working my way down the bank fishing slowly with the ned rig and picked up a little guy a ways down the bank.

For the rest of the day I only landed one more bass (another pretty decent largemouth) on a wacky rigged, weedless senko up around some shallow grass.

I hooked a few more fish but they all shook the hook.

That was it for me for the day. I only caught 7 bass but I went into the day thinking I might get skunked. Expectations make such a huge difference in how you feel about the day!

Here is some video from the day - including the stupid break off. Check those lines!

Thanks for the report @bass. Are the restrooms open or are there portable restrooms? How busy was the ramp and how full was the boat trailer parking (if you noticed)? I'm planning on trying the Willamette between Portland and LO on Thursday morning. I'll let you know what I find.

Most Featured
There are porta-potties around. I am not sure if the normal restrooms are open or not.

The no-wake section was pretty crowded by noon. It was hard to find a stretch to fish by then that had not just been fished by someone else or was being fished by someone else (boat or bank). I think the boat trailer lot was about 1/2 full at ramp C, but I think almost all of them were fishing. There were also a ton of folks fishing from kayaks, canoes, pontoons and float tubes. I would say it was about as crowded as I had seen the lake from a fishing point of view.

On the way out I think it looked less crowded towards ramp A (from a fishing point of view). Maybe that is the winning strategy. Forget the no-wake zone and fish the main lake. I might go ahead and do that next time.

@fromthelogo I did read in a shad thread on another site that the grass in the lower river does not seem as bad as it was a few weeks back. Hopefully that helps with the bite!
You must log in or register to reply here.
Share:
Facebook Twitter Reddit Pinterest Tumblr WhatsApp Email Link
Top