Smaller streams that harbor early returning steelhead will start to fade. Rivers such as the North Fork Nehalem, Necanicum, Three Rivers and the Klaskanine River, Big and Gnat Creek have peaked for fresh-run winter steelhead, but should have near spawning fish still available.

The Wilson showed promising signs early in the week, with some nice broodstock fish hitting the deck prior to the rapid river rise on Wednesday. 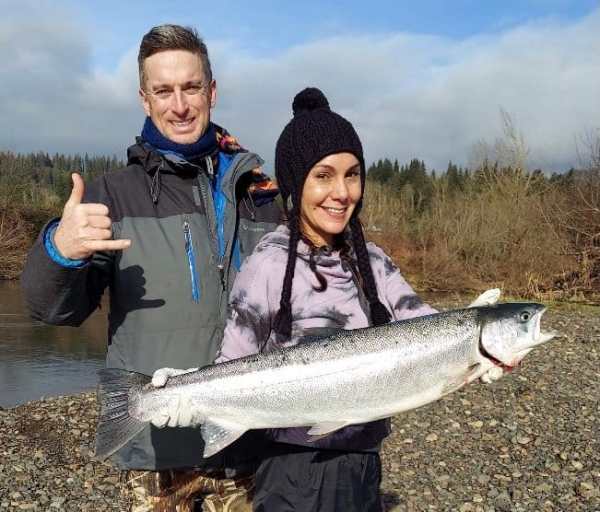 Quality hatchery fish were also starting to enter the Nestucca prior to the big event, and both the Wilson and Nestucca should start to fish decently by Saturday and Sunday respectively.

The Trask River is starting to see better numbers of wild fish enter for catch and release anglers, with an occasional hatchery stray appearing here as well.

The Alsea is about done with early returning fish, but quality broodstock steelhead should start showing in better numbers on this river, along with the Siletz when water conditions improve over the weekend. Broodstock steelhead fishing on both of these rivers will improve in February however.

The ocean remains dangerously rough although Thursday presented an opportunity for the commercial crab fleet to retrieve the season’s first catches after a long dry-dock period. That window won’t last long however as seas go back to buckin’ Thursday evening. It was a wild week on the Oregon coast.

There is always more Oregon fishing information delivered earlier on Bob’s site, The Guide’s Forecast. You can also sign-up for a free weekly email here to receive updates covering all of Oregon and SW Washington.
You must log in or register to reply here.