Following the flood event of last week, steelheaders working the Wilson did well on Monday, with some guides reporting limits of early run hatchery fish and some wild ones too. Pro guide Chris Vertopoulos found a couple of large 3-salt fish on both Monday and Tuesday, with one in the mid-teens that gave a reason to celebrate for his customer Brad Baker: 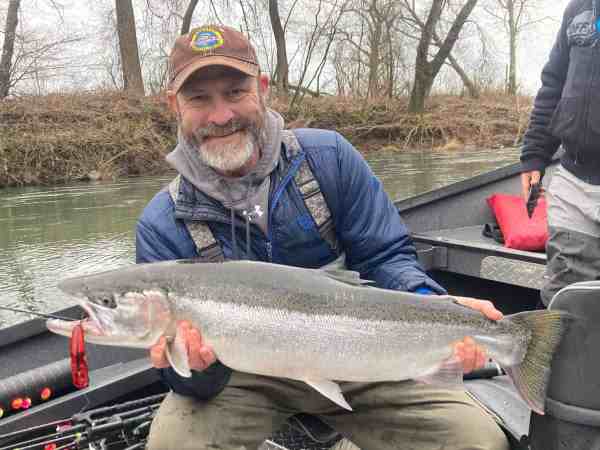 Brad Baker with a 14-pound plug-caught buck from the Wilson on December 29th
The Nestucca hasn’t been fishing quite as good, but its broodstock fish start to show up a bit later. This fish, caught by Brad, was a broodstock fish as we’re starting to see a transition from early run Alsea stock fish to these broodstock brutes about now.

The NF Nehalem continues to report fair-at-best fishing despite peak season and good water conditions. There’s fish caught every day, just not many of them.

The Necanicum seems to be getting a good return this year. It’s a great time of year to intercept these fish even higher in the system so avoid private land, but there are hatchery steelhead to be had!

The Highway 30 systems are at their peak as well right now. Big and Gnat Creek and the Klaskanine River are all producing fair catches.

There are a few wild fish in the Kilchis and Trask systems, the mainstem Nehalem will remain too high to fish for a while longer, especially with a new set of rain freshets on the horizon.

The Alsea report from ODF&W reads:

Winter steelhead fishing is picking up on the Alsea River. The recent high water has put fish on the move headed for the hatchery on the NF Alsea and anglers are catching them. Conditions will be good this week on the popular NF Alsea bank fishery as the river levels drop back into shape.

The dry weather in the forecast will keep the river on the drop and fish moving through the holiday weekend. Conditions will be good for the drift boaters later in the week and into the weekend. Fish are now distributed throughout the river and the numbers will increase with each bump in river levels.

This information is a week old, but should still have applicability.

The Siletz is still slow to start with not much effort, but like other north coast systems, fish are available and it will only get better from here.

The lower Columbia continues to be productive for crabbing, but weekend weather will make it a bit of a dicey option.
The Guides Forecast - Helping you catch more fish
You must log in or register to reply here.