Most Featured
I launched out of Cedaroak boat launch in West Linn on Sunday around 5:30am. I met up with @portlandrain and I think we both had thoughts of an awesome topwater bite when we hit the water. He launched first (I am terribly slow since I pack way too much junk) and he headed across the river. I saw bass breaking near the launch so I just stayed in the area and started working a topwater. Bass were breaking all around me and after a dozen casts I finally caught a nice little 1.5lber. I was surprised that it took that many casts to get bit but shrugged it off.

I went back to throwing my Sammy but after another dozen or so casts without a hit I switched to a whopper plopper. After a dozen or so casts without a hit I just decided that even though bass kept breaking around me that whatever they were feeding on I was not imitating. I reluctantly put down my topwater rod and picked up a rod rigged with a 4" paddle tail swimbait. That turned out to be winning move. On my first cast, I caught a smallmouth that was a clone of the first. I kept moving around, sometimes casting to breaking fish sometimes just a random direction.

I just moved in a circle around the ramp area and picking up bass. I got 8 total on the swimbait before I tired out that area. Nothing over 2lbs but they were really choking that bait and I was reaching deep to unhook them. That let me know I was doing the right thing. The sun was starting to filter onto that side of the river and they surface action was done.

I moved to the other side of the river and kept throwing the swimbait for a bit, but I guess East side bass don't like that swimbait. The area was still nice and shady but I could not get a bite. I tossed a topwater for a bit, but that did not draw any strikes. I tossed a crankbait a little and that was ignored as well. Finally I picked up my Ned rig rod. I did not think I was going to be touching that thing for at least another hour and maybe two.

Pretty much immediately I caught a 1lb bass. I fished around the first area (a good sized reef) and picked up a fish here and there but did not find a bunch like I was hoping for. I moved down the river to a very evident rockpile. The key thing about that structure is that offshore a little ways there is a rock pile that is not quite connected to the shoreline pile and is easy to miss. When I went over top of that pile (15-20' of water) I started marking a lot of bass. My strategy was pretty simple. I would find the rockpile and then drop down on the bass I was marking. Pretty much every time I did this I would hook up. I did not land them all since I don't think that angle is the best for getting a good hookset on the Ned rig (I was too lazy to rig up a dropshot which would be ideal). However, I was catching them often enough that I was able to tolerate the fish that came unbuttoned.

This is not a huge structure so after a bit the fish stopped biting. At that point I decided to head downstream and check in with @portlandrain. I told him that I had been killing it with a Ned rig and he said he had not been having very much luck. I gave him a couple of the weedless (rockless for our purposes) Ned rig jigheads I was using and one of the Zman TRD baits I was using. I then showed him a spot where I usually have success (a ledge with a sharp 10' drop). I think it was his first cast, but maybe it was after the first couple, but he hooked and landed a nice 1.5lber. A short time later he caught a second nice fish to match the first.

At that we point, we stopped and laughed at how stupid the Ned rig is and how well it worked. After a bit we split apart and for me the day was pretty straightforward. I would get on a nice rocky structure with current and a break and catch smallmouth on the Ned rig. For the most part I was only finding small schools. I would catch 2 or 3 on a spot and the bite would die. I am not sure if somehow the sunshine makes them more sensitive. One cool thing I got to see was that when one of the bass I was fighting was near my kayak it puked up a small baitfish and another bass that was with it immediately grabbed it. I guess cool and a little gross.

@portlandrain had to leave early and we checked in before he left. He said he had some success tossing a spinnerbait into the water near shore that was being made murky by all the wakeboat and powerboat traffic. That was a really smart move since that is a much more fun way to fish than tossing the Ned rig in that rough water. I stayed lazy and just kept tossing the Ned rig and catching bass until I got to one of my favorite humps that is out quite a way from shore.

I was basically out in the midst of wakeboat land. It is kind of like fishing in a warzone. I am trying to delicately probe the bottom with soft plastic while bouncing up and down 2 feet. I put down the Ned rig and picked up a Carolina rig. It is pretty ideal in these conditions (and many others as well). I was able to keep good contact with the heavy weight. This is a pretty huge structure and it took me a while to find them but one I did I had some lights out fishing. This day the bass were on the lip of a trough on the shore side of the hump where it drops from about 12-14' down into 28'. There are a lot of rocks and some trees on that lip and when the fish are there they are thick!

I fished that spot until I got tired of battling the wakes. It is not very run to fish with my head on a swivel and keeping my kayak in position with the current, wind and waves eventually wore me out. The interesting thing I will add is how aggressive those fish were hitting the Carolina rig. A couple of times I went to lift and nearly had the rod jerked out of my hand by a bass that had picked up my worm. If they had been biting softly I am not sure I would have had very much success in those challenging conditions.

Around 3:30 I packed it in and pedaled back to the ramp. Overall it was another fun day on a very prolific fishery. I still need to do a better job of finding better fish but otherwise I can't complain. I ended up catch 58 bass in 10 hours which is a pretty good catch rate. It is still interesting how bursty it is at times. I think I had a few 1/2 hour stretches where I did not land a fish, but they were made up for by bursts of crazy hot action.

Here a couple of pictures of fish. I did not take any pictures of the better fish I got early in the day, but took one picture in the morning and another towards the end because the fish was so skinny which is really weird this time of year.

Normal pounder for the day: 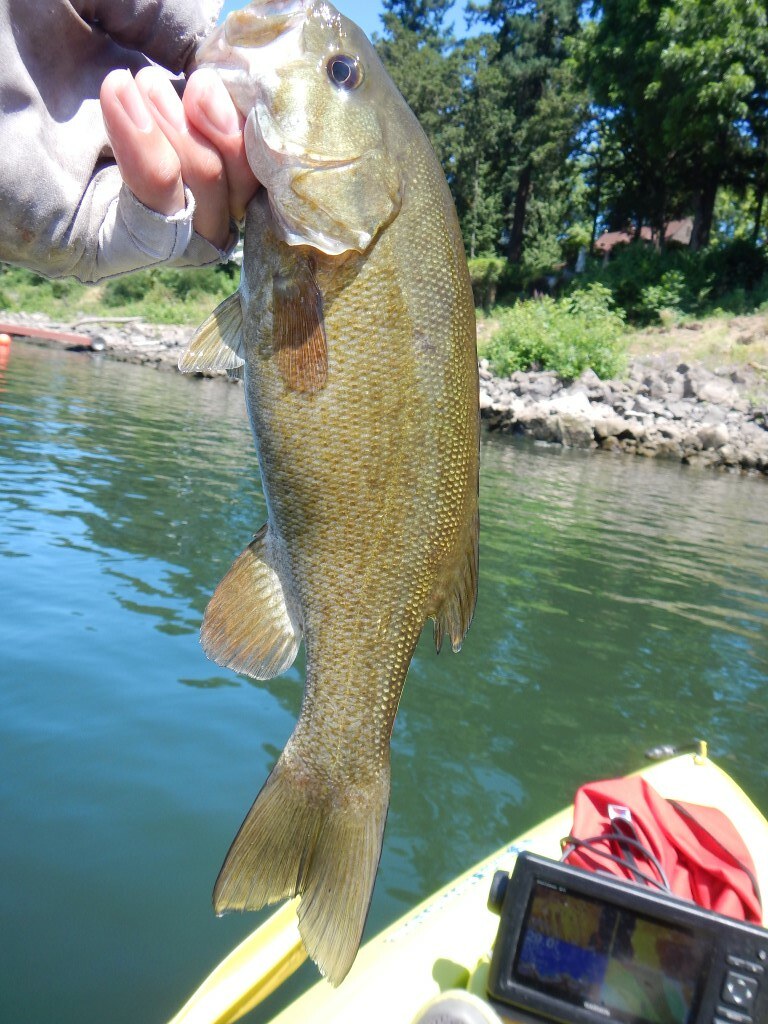 That was inspirational. I need to make my annual smallmouth trip soon. 58 fish sounds fun.

@C_Run, the nice thing about the Willamette is that the fish seem to bite pretty well all day. In the morning (or on cloudy days) I can usually fish reaction baits all day long and that is the most fun. On sunny days I usually switch over to a drop shot or a Ned rig and you can catch bass in 10-20' of water on rocky structures pretty much all day long. Steep banks are good and humps and points are usually even better.

The fish do move around a lot and some days a spot that has been great for a couple of weeks is barren. I don't understand what causes the movement but I just try to keep an open mind and roll with the punches. I don't try to make them bite at any location. Usually they let you know within a dozed casts if anyone is home that particular day.

Next time you hit that area up, could you let me know i would love to gain some of your knowledge on some smallie fishing in my area. I got myself a cheap fishing kayak but it does the job.

Most Featured
I am not sure when I will fish there next but I will send you a PM later this week to try to give you some locations and approaches to help you out. If you do not hear from me by Friday evening please ping me again. Lots going on at home right now (the curse of every angler).

Thank you so much, i would greatly appreciate it. I have fished for largemouth in Florida but never really targeted smallies. especially on a large river like the Willamette so i am a bit intimidated. Also i do have a FF on my kayak.

Thank you so much, i would greatly appreciate it. I have fished for largemouth in Florida but never really targeted smallies. especially on a large river like the Willamette so i am a bit intimidated. Also i do have a FF on my kayak.
Click to expand...

@bass I've been hitting that spot on float tube for a few months now. Biggest evening I caught 11 on a fly and my buddy did 14 on TRD's all in about a 2-3 hour period. the inlet upriver at the island can be really fun too. Take a shot around the point and into the U on the island. Water has to be up though...

Most Featured
Thanks for that info @OLDNEWCLACKA

There were some fish busting the surface in the area that you are describing but they looked smaller. I usually fish to about the mouth of the U but rarely go inside. I seem to catch smaller fish in the U then out in the main river. I keep meaning to go looking for crappie back in there but I never save any time to do that.

I also keep thinking about a winter bass fishing trip into that U. I figure that area must hold quite a few good sized bass in the winter.
You must log in or register to reply here.
Top Bottom