Most Featured
We got to the water right around first light, but there was not much of that to be had. There was a dense, Stephen King-like fog, permeating the air. I was not sure how that would affect the fishing. The water had come up a little and dropped back down during the week. The super steady summer pattern was clearly at an end. I was not sure if there would be any topwater bite or not. I made a long cast with my stick bait to where I could barely make it out in the fog, I started working it back and bam! 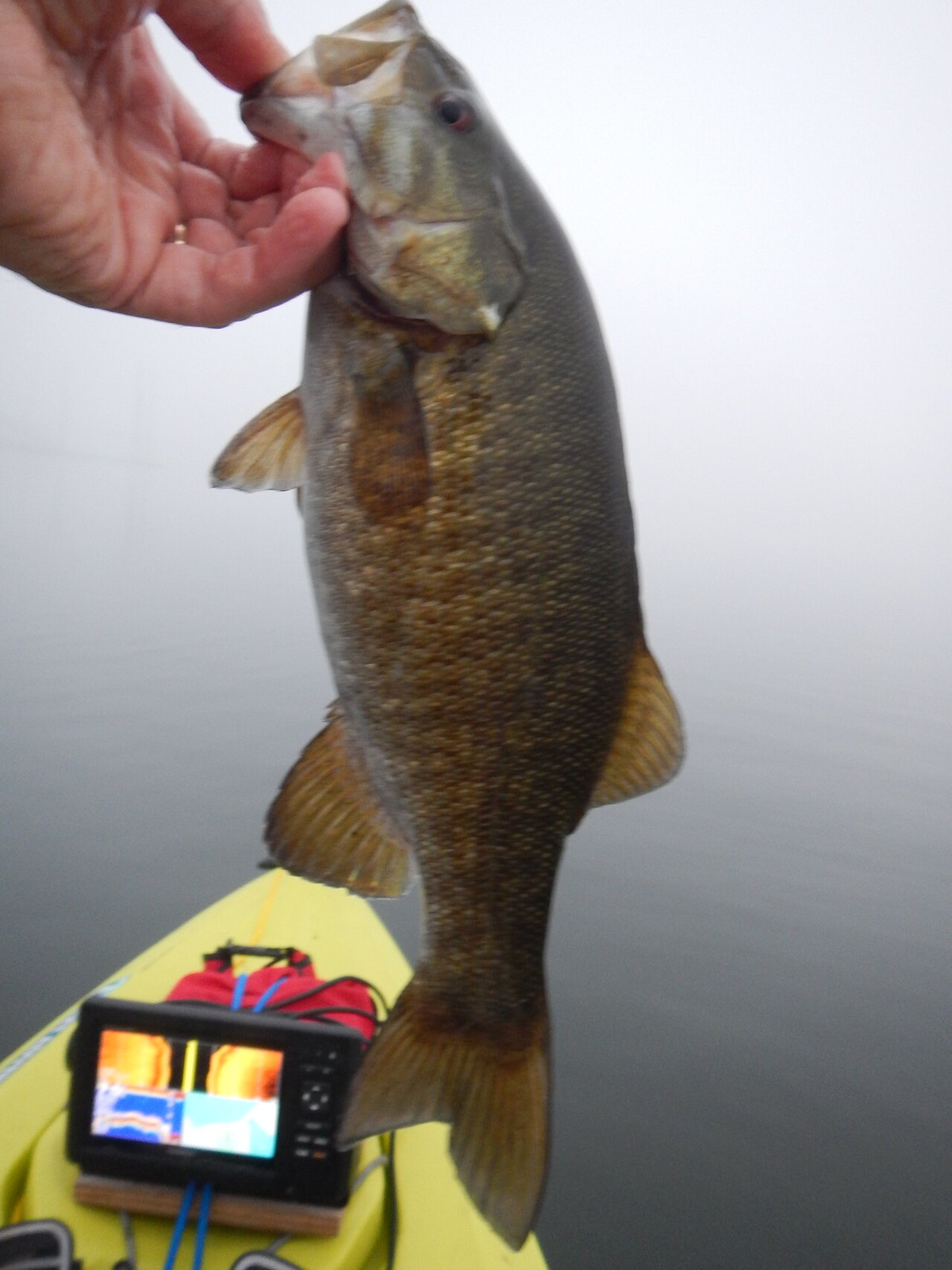 Now that is a nice way to start the day. On my second cast, my lure was attacked again. Then after a handful more casts another nice-sized smallie latched on. 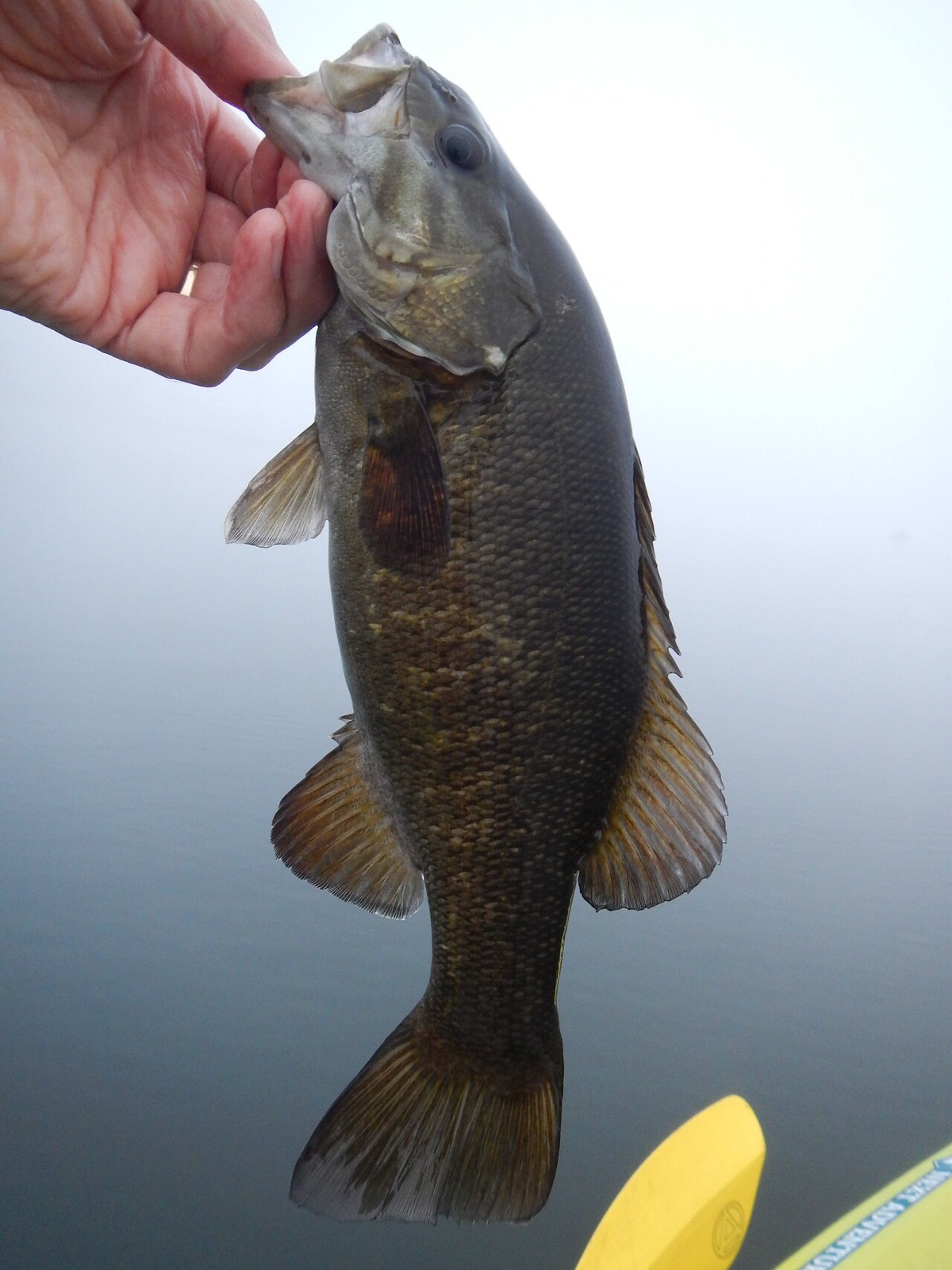 After that quick flurry of action I made a lot of casts and even tried some sub-surface lures before I eventually picked up another nice-sized bass on the topwater. It was not on fire but at least the fish were good-sized. I continued to work may around the big flat around the island and up its side, eventually getting one more nice sized one on the topwater. I zoomed across the river through the fog and started fishing some flats on that side. I picked up 2 more on the topwater, again both good-sized fish, and that was it for the topwater bite. Similar to last week, the bites I got were ferocious. The few fish that hit the topwater seemed to be really keyed in on it, but there just weren't that many playing the game.


I through a some subsurface active baits for a short while, swimbait, jerkbait, vibrating jig, but I could not find aggressive fish. Eventually I set down my active stuff picked up a drop shot and went looking for bass in deeper water. Once again, it was similar to the week before. I could find small schools of bass but I could not a find a spot where I could just sit there and pound on them for an hour or two. So the action was slow and steady and consistent in that regard. The interestign thing is that all the fish were North of a pound. No dinks and the fish were definitely chowing down on crawdads. 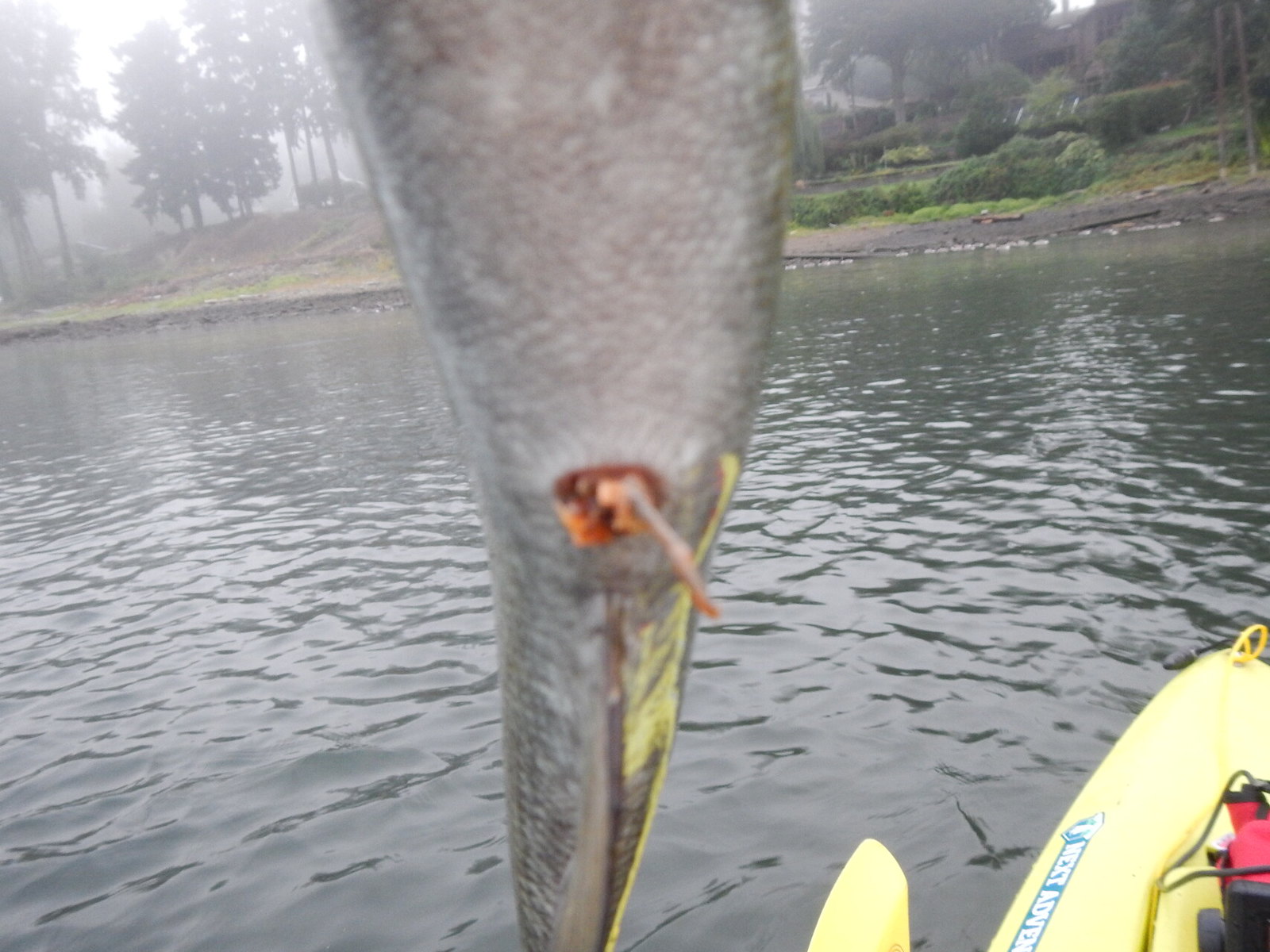 As the morning wore on the fog burned off and the bite did not really change. A really good spot would produce 3 or 4 bass but most only one or two, but the quality stayed good: 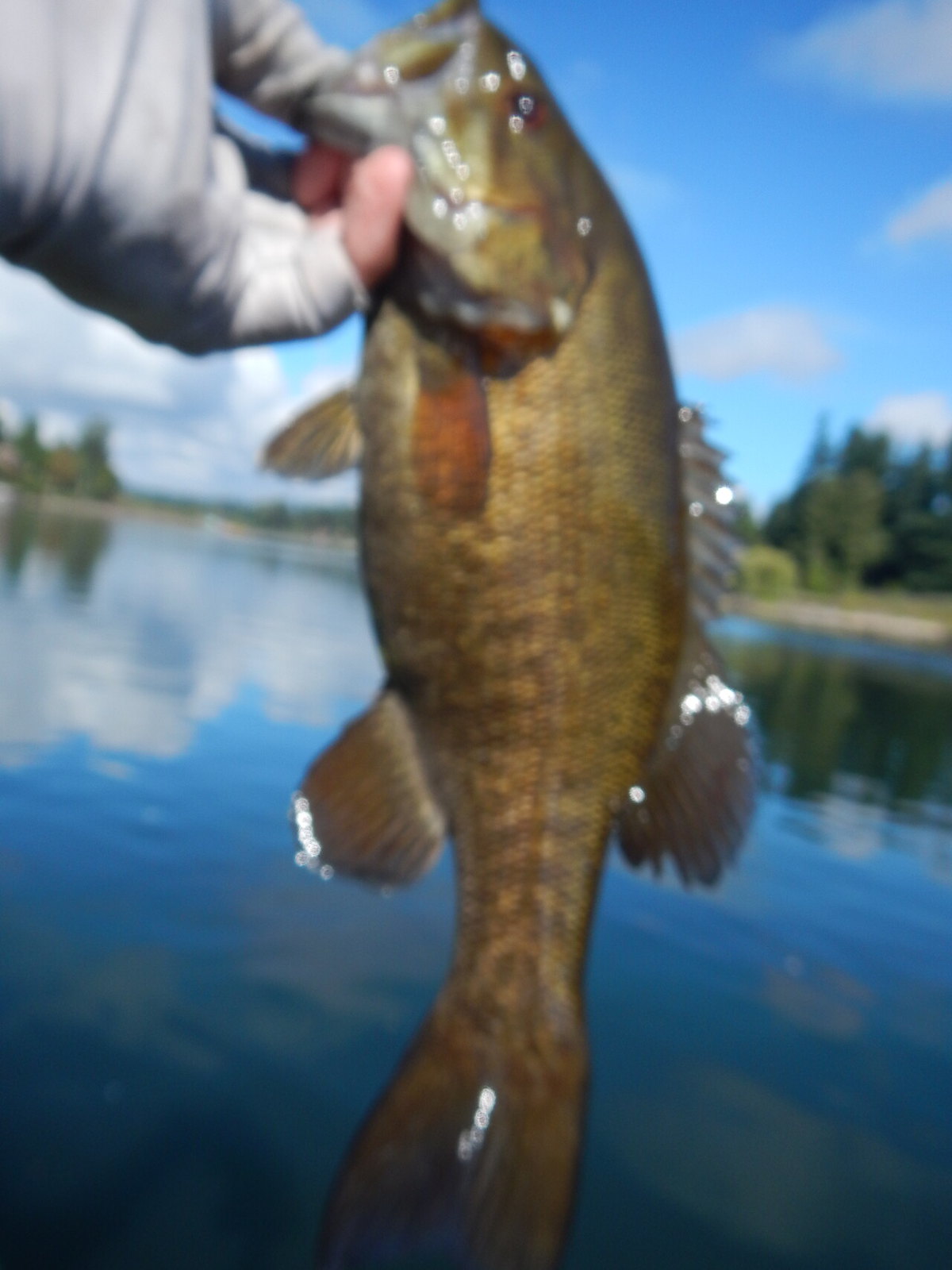 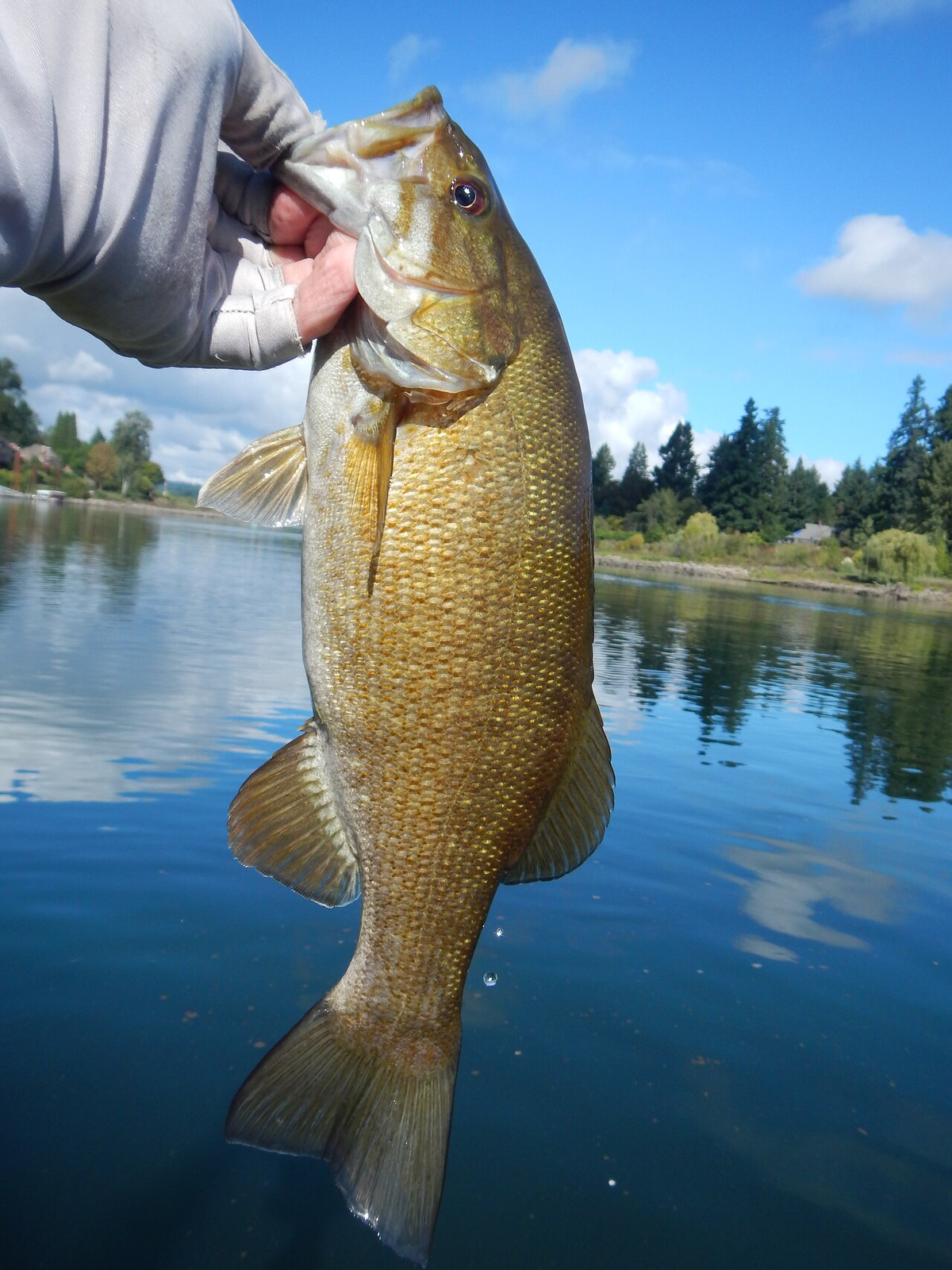 Around 11:45 I decided to give the sturgeon a shot since the outgoing was just getting underway. It was a small exchange but there seemed to be a good amount of current which usually bodes well. My friend had never caught a sturgeon from a kayak (and did not want to try since he was a little worried about stability), but he wanted to see how I anchored up and fished for them from the yak.

I had not been in a while and I was definitely a little rusty. I dropped anchor to try and be nearer the one shore and ended up dead smack in the middle. I did not even cast out. I pulled my anchor and re-dropped closer to shore. Still further out than I wanted but good enough.

Within 5-10 minutes of casting out I felt that old familiar tap, tap, tap. I picked up my rod to baby that bite but there was no need. That fish took off like a freight train so I through the reel in gear and that fish hooked themselves as the rod was nearly torn from my grip. I had forgotten how strong those fish are when the water is in the low 60s.

I unhooked from my anchor and the sleigh ride was on. That fish was so strong and so fast pulling me along at a couple of miles per hour. Each time it changed directions it did so suddenly and each time the kayak jerked to a stop. I was pulling with all my worth but that fish acted like it did not care in the least.

Like so many fights just when I feel like I will never budge that fish off the bottom I was able to get that fish under control and start pumping it to the surface. Every angler knows that triumphant feeling of the turning point of a battle with a big fish. The rest was just a grind getting it to the surface. There was some give and take, but I was taking more than I was giving. It was a nice fat, healthy fish. 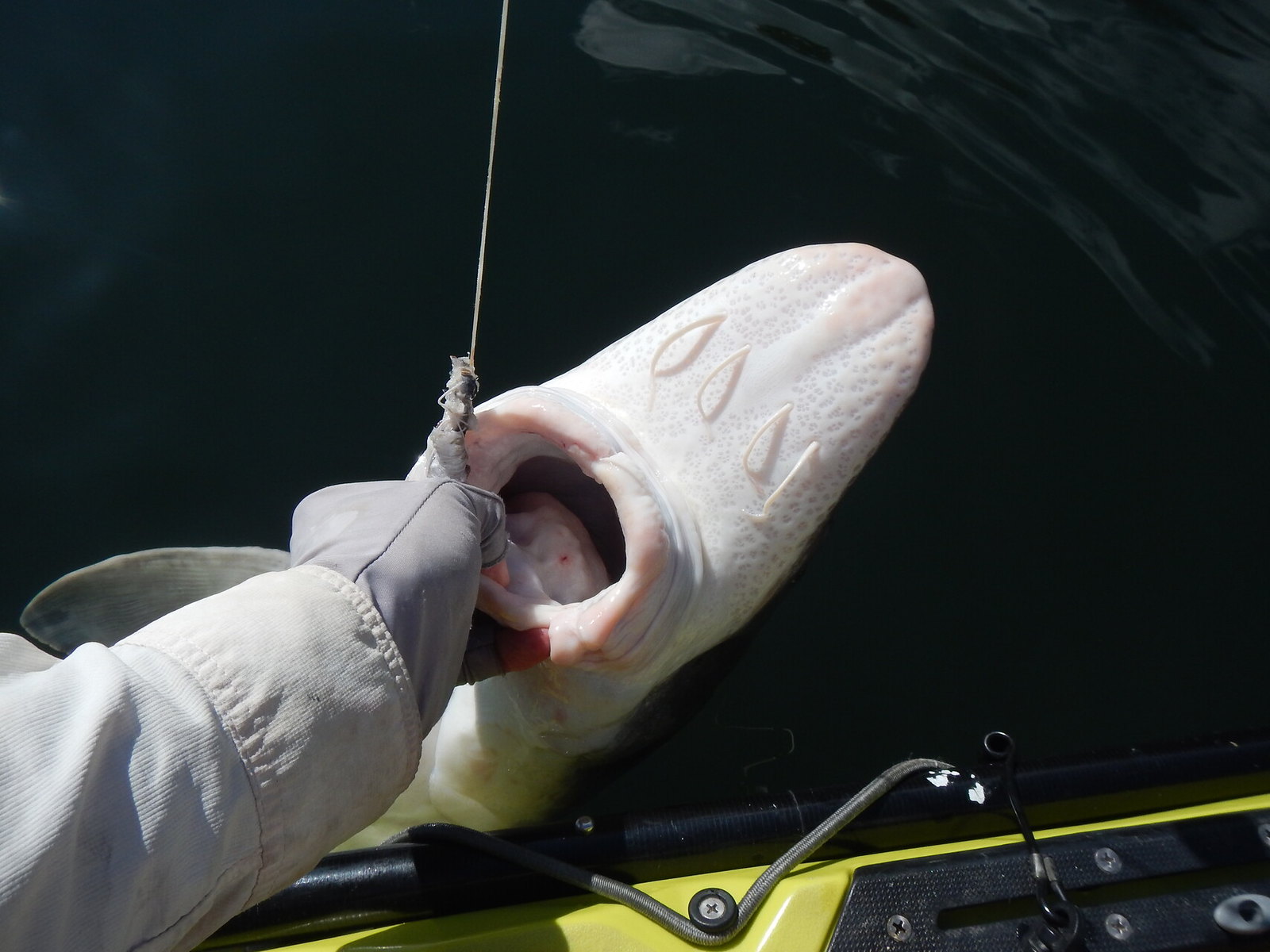 I tried to measure it but it twisted away before I could get the tape measure out. I would guess at least 4 feet. No monster, but a really fun first fish of the season. My friend had to leave then so all he saw was me catching a fish super fast.

I anchored back up and I was almost trembling as I cast back out. Narrator's voice: "3 hours late". That one fish was it. I moved around several times, moved my casts around like crazy but I could not buy another bite. I think my friend must be good luck or a pied piper of sturgeon. When he left the bite left with him.

After getting tired of watching a quiet rod I decided to bass fish my way back to the ramp. The wind had picked up some and there was a good bit of boat traffic so I thought the rippling surface might get the bass active. I started fishing with a swimbait and on my second cast I missed a fish, and on the third and the fourth as well.

That is weird I thought. Then on the fifth cast I hooked a big fish. I knew this was my best of the day. I carefully worked it in and lipped a 3lb pikieminnow. A few casts later I caught its twin. I kept working my way up the bank with that swimbait and probably caught 10 pikieminnows in short order. Same spots I had been killing bass the week before. Very strange. I finally put down the swim bait and picked up a Ned rig. I worked a little deeper and eventually started catching a bass here and there.

Same slow pace as the morning but same good size on every fish. By the time I made it back to the ramp I was pretty tired. It was a weird day. I caught less than half as many bass as my worst trip all summer, but all the fish were decent sized. Only catching the one sturgeon was disappointing but at least it was a good sized fish. That was the theme of the day. Lower numbers than expected and better quality. I made a lot of casts for every fish I caught but that is how it goes some day.
Last edited: Sep 23, 2019

@bass. I really enjoy reading your posts. Thanks! I have been fishing out of Newberg all Summer - finally starting to feel better throwing finesse rigs (NEKO rigs, drop-shot, etc..) Have always done fairly well on lipped plugs. Have a question for you - with water temps in the Willy coming down - how cold can the water get before the bass stop biting? 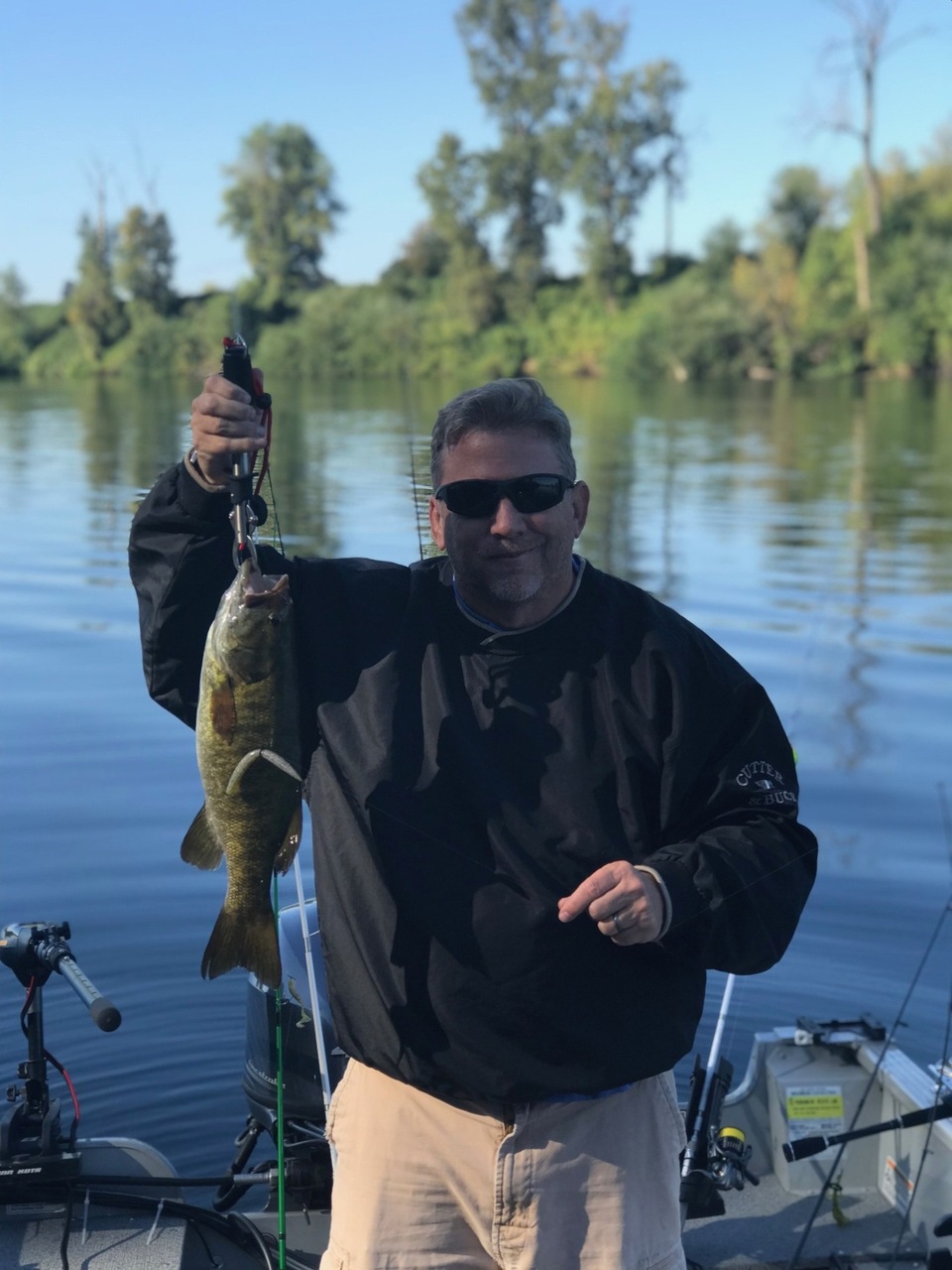 Mdiscom said:
@bass. I really enjoy reading your posts. Thanks! I have been fishing out of Newberg all Summer - finally starting to feel better throwing finesse rigs (NEKO rigs, drop-shot, etc..) Have always done fairly well on lipped plugs. Have a question for you - with water temps in the Willy coming down - how cold can the water get before the bass stop biting?View attachment 615848
Click to expand...

Nice fish! I don't have a good answer to your question. It has always seemed like as the water drops I catch fewer fish but they are better sized. In Pennsylvania, I would fish and catch bass until the lakes iced up. That would usually entail fishing all day for 2 or 3 bites, but usually the fish were 4+lbs. However, those were small lakes and I am not sure where the smallmouth winter over on the Willamette.

For me, I usually start to transition to sturgeon around now. The cooler the water the more time I spend dino hunting and the less time I spend bass fishing. Usually, once we get the first big rain the fall (that brings the summers collection of junk down the river) I stop fishing for bass. Cold muddy water is brutal for bass fishing.

I would think places like the lagoon at Cedaroak island, the lagoon at Ross Island, Swan island harbor and places like that would hold fish either at their edges or deep in the middle but that is just a completely unproven theory on my part. I do see a lot of small bait in Swan Island in the winter when I sturgeon fish there. I always think that there just have to be smallmouth in there feeding on them and I have made a few very half-hearted attempts but never had a strike.

So, I don't think they ever stop biting entirely. It just comes down to how much effort you are willing to put in to get a bite or two when the sturgeon fishing is usually pretty decent.

Great report, as usual.
You must log in or register to reply here.