Most Featured
@portlandrain and I hit the Willamette out of 10th street again on Sunday. Things did not look particularly promising as the river had come up a foot, current was stronter, it was a little murkier and the water temp had dropped by 2 degrees. To put the icing on the cake the grass/moss problem seemed even worse.

Fished similarly to the week before. Started off fishing points and flats along the shoreline and with a similar lack of success. I threw a crankbait, rattletrap, spinnerbait, swimbait and topwater without so much as a sniff. If I was a vegetarian though I would have been killing it. Lots of salad on almost every cast. I don't remember the grass/moss being this bad in the past. There are just non-stop balls of the stuff coming down the river.

This week though, I was a little quicker about moving out to mid-river humps but the bite there was really slow as well. I did pick up this guy on a swimbait but the bites were few and far between. 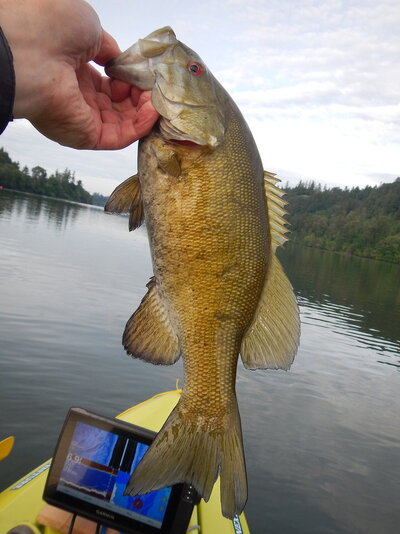 After a few failed attempts to fish deeper I went back to fishing the tops of the humps. That would occasionally yield a fish but most of those were dinks.

After struggling out in the main river we decided to head back into the slough. @portlandrain caught a really nice 2lb 7oz bass near the mouth of the slough! My best fish of the day was probably about a pound and a half.

As we fished our way up the slough (mostly throwing Ned rigs) one or the other of us would occasionally catch a fish. I eventually made my way as far back as I could to a little section that does not have any current flowing into it. The water temp there was all the way up to 60 degrees (the main slough was around 57 degrees and the main river around 55 degrees).

That little section is also very shallow and I was able to pick up a few fish on a Baby Bull Shad. That is a hard jointed swimbait that runs very shallow. It was fun watching the attack that bait, even though all those fish were dinks.

Overall it was a really tough day for me. 12 bass in 11 hours. Not really lighting it up. I sure hope the warmer weather gets the bite turned on and that the grass/moss starts to die off. I don't remember it being quite this bad in past years.

Here is a short video of a few of the day's fish:

Great report as usual though, seems like as summer starts the weeds really take over in this state, could just be I'm not used to having real seasons!

How often do you throw swimbaits like the shooter? I've got some Jackal Gantarels, Duckett Shads, and mattlures soft gills on the way, hoping to throw big swimbaits more often even though it's late in the year for them. (Bluegill baits that is)

Most Featured
When fishing bigger waters for smallmouth (that often move long distances) it is always hard to know if you are fishing over fish and that they are not very active or whether there just aren't fish in an area. I am still not sure what the deal was this past weekend. There were some fish in the areas we were fishing but I have no idea if we did a good job of catching the few fish that were there or whether we were fishing over tons of fish that would not bite.

The grass/moss that is so horrible right now gets better later in the summer. The big problem is that there is tons of it floating through the water column, not just that it is on the bottom. I am not sure but I believe that this is largely due to the flow velocity being strong enough to dislodge it. It sure seems like once the current drops a bit so does the grass/moss problem. Until then though, it is a painful struggle.

Golfbum said:
Please, Log in or Register to view URLs content!
Today we went to Willamette Boat Ramp to put our two kayaks in the the river. All single space parking places around the park were filled. The vehicles with trailers lot was less than half filled and over half of those parked in the lot were not pulling trailers. I returned to find a $30 ticket for parking there. The police officer was in the lot writing out tickets to all the cars parked that did not have trailers attached. I asked the officer why he was doing this and he said because boaters would not like it if they didn't. I tried to explain to him that the lot was not even half filled and he would not hear it. Laws are important I'm aware but there is the letter of the law and the spirit of the law. I was not preventing any boat owner with a trailer the right to park there. It simply was a weekday and not many boats on the river. It would have been along walk to the river on a hot day and it made sense to me to shorten our walk. BTW this is the second time this has happened at a boat dock in West Linn. The last time the police officer wrote out over 30 tickets for the same violation. The tickets were dismissed because of the poor signage at the ramp. We kayaker paid a fee to use the river just like other boaters do. My trailer is a roof rack , what's the difference?
Click to expand...

I got a similar ticket parking in Cannon Beach in January for parking in an RV spot. There wasn't a single RV in the lot and not a single car parking spot to be found.