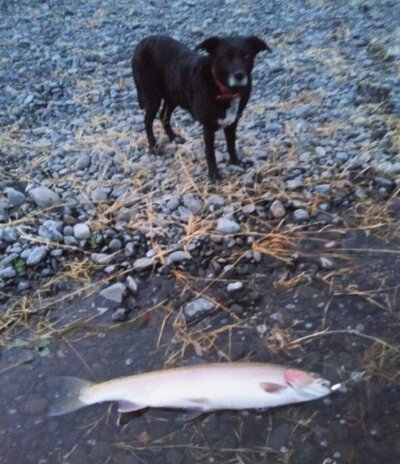 This one was a special fish for me. I nicknamed her "Mobius" - fought like a banshee. Not the largest ever, but the hardest running bullet of my life. Multiple drag burning runs that culminated in leaping twisting somersaulting acrobatics in the twilight. Lucky and surprising that she didn't throw the hook along the way. Got her into the shallows and confirmed to be wild. Guessed weight to be around 12# before watching her dart upriver back on the trail toward the tributary of her birth. Anadramous fish have a mythic and sacred appeal to my outdoor passion and nature worshipping tendency. Vikings had a rudimentary symbol for salmon, which hales to the Swedish side of my heritage. Though they're dwindling, most lands bordering the north Atlantic and Pacific had historic runs of anadramous fish that were an important food source as well as an embedded cultural icon to ancient people. The drive to catch fish is probably written into our dna, and anadramous species seem to have an amplified gravity in that respect. This fish made yesterday's outing a special memory for me. Tight lines my fellow anglers!
You must log in or register to reply here.
Top Bottom